January 29, 2015: Southern California Teamsters packed the house last Sunday to back a campaign for new leadership in the Teamsters Union. 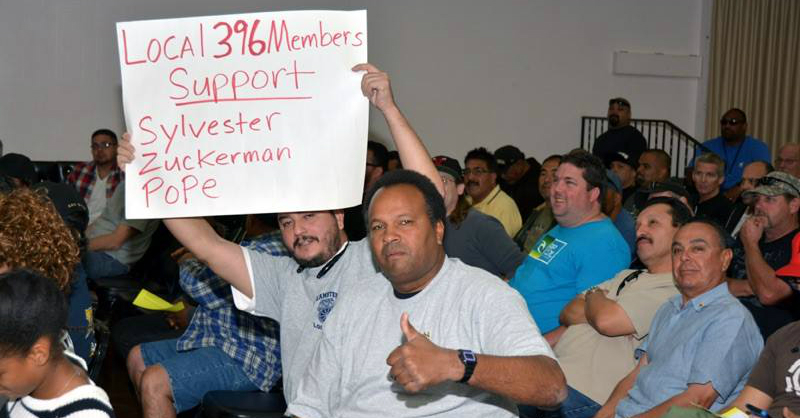 California Teamsters are getting into the campaign to replace the Hoffa-Hall bunch with leaders committed to building rank and file Teamster power and they are not waiting until the ballots go out in 2016.

On January 25, 125 Teamsters came together near Los Angeles to hear Tim Sylvester of New York Local 804 and Fred Zuckerman of Louisville Local 89 talk about the coalition that is coming together. And they also talked about action: raising money, putting together delegate slates in various locals, and working to officially “accredit” a new leadership slate with a national petition drive that must be done this summer.

It was the largest California rank and file gathering for an IBT campaign in nearly 20 years, and it was the diverse group needed to make it happen. This isn’t just a coalition at the top, but among the rank and file. Members who have not worked together in the past – including many former Hoffa supporters – were in the hall and ready to unite for change.

Freight Teamsters, grocery warehouse Teamsters, UPSers, solid waste drivers, public employees, and more were on hand, from 10 different California locals. A few Teamsters attended from Arizona and Utah and are ready to spread the movement back home.

Richard Galvan, a UPS feeder driver in Local 396, addressed the group and is raising money for the campaign. Speakers from the floor – including from San Diego – discussed what needs to be done. Freight Teamsters asked questions about what change at the IBT can mean for Teamster power in trucking.

Click here to get involved if you want to see change in 2016.