After stonewalling corruption charges for more than a year and a half, Rome Aloise, Hoffa’s main power-broker in the West, has been found guilty of all charges in a 60-page decision by Judge Barbara Jones. 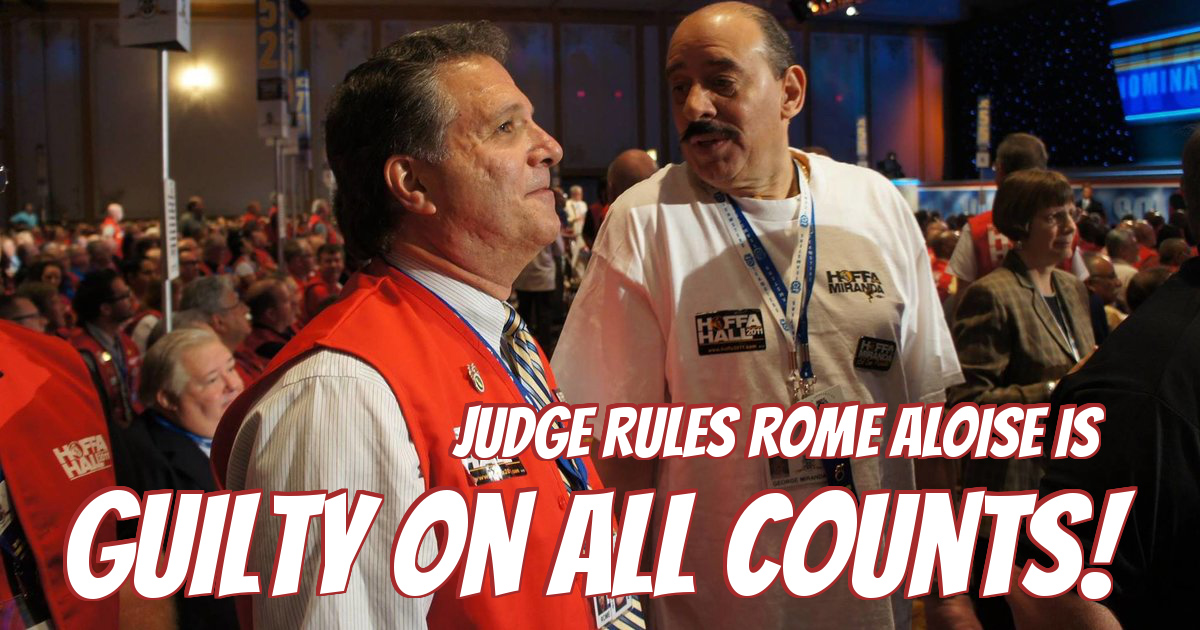 Aloise solicited tickets to an exclusive Super Bowl Playboy party from an employer that he was bargaining with; he used his union influence at two employers to force them to hire his cousin; he negotiated a sham union contract with an investment broker friend; and he illegally used union resources and power to ensure the election of his supporter in Local 601.

Judge Jones, the Independent Review Officer, ruled that, “The evidence supports the charges against Aloise, and that Aloise brought reproach upon the union.”

Jones did not issue a punishment with her decision. Instead she requested submissions from Aloise and Independent Investigations Officer on what the appropriate penalty should be. This will take a month or more.

Incredibly, more than a year and a half after being charged, Aloise will have even more time to delay and stonewall justice.

He should be removed from all Teamster positions and barred from the union.

It is Hoffa's responsibility and duty to root out corruption; with the decision in hand, he should remove Aloise from appointed positions and urge his expulsion by judge Jones.

Rome Aloise’s history in the union is a case study in what goes wrong when leaders are separated from the rank and file in a system where the leaders believe they own the union.

Aloise had it all. His father was a well-respected Teamster official in the San Francisco Bay Area. He was handed a career in the union at a young age. He went to college—and was soon handed a job as a union official.

He married into Teamster power. Chuck Mack, the former Hoffa VP and head of Joint Council 7, is Aloise’s brother-in-law. So is Steve Mack, who retired as a Division Director under Hoffa.

The road was well paved for Aloise, and he drove it fast. He had smarts, too. Aloise had ideas like organizing in Silicon Valley, and he moved on them. He made political connections in California—and he built a reputation as a progressive.

But isolated from the rank and file and protected by the Hoffa administration, Aloise’s arrogance was off the charts.

He repeatedly violated the most basic union principles to advance his personal power or to exact revenge.

After Aloise tried to raid some recycling workers out of the Longshore Union (ILWU) and failed, he directed Teamsters to cross their picket lines when the workers went on strike.

In another case, Aloise threatened to sabotage Teamster strikers at Safeway because the local union leader was running against the Hoffa Slate. The Election Supervisor called it the worst violation of the entire election cycle.

When a single member ran against him for union office, Aloise illegally expelled him from the union. He was found guilty of that too.

Now, Aloise joins John Coli as another Hoffa kingpin brought down by corruption, employer payoffs, and their own arrogance.

Coli, the former head of Chicago Joint Council 25, awaits trial on charges of taking some $300,000 in payoffs from an employer.

Aloise is an International Vice President, the President of Northern California Joint Council 7, and head of Local 853, as well as Director of the Food Processing and Dairy Divisions of the union.

These Teamster leaders took huge salaries and then betrayed the members’ trust by taking employer payoffs. But even after their crimes were exposed, top Teamster officials rallied around them.

Hoffa nominated Aloise for Vice President after he was charged with 122 pages of corruption charges. Teamster officials set up a “defense committee” for Aloise.

The Hoffa administration will never act against corruption when it implicates the power brokers who keep them in office.

Teamsters for a Democratic Union exposes corruption regardless of who it implicates--and that’s precisely why we’re attacked by the likes of Hoffa, Coli, and Aloise.