Central States Pension Nyhan and Hoffa: Is it Real or Fake?

Central States Pension director Thomas Nyhan has called Hoffa’s bluff and announced pension cuts will go on as scheduled. Will Hoffa actually mobilize to stop the worst pension cuts in Teamster history or is this all for show? We will find out in one week on October 2. 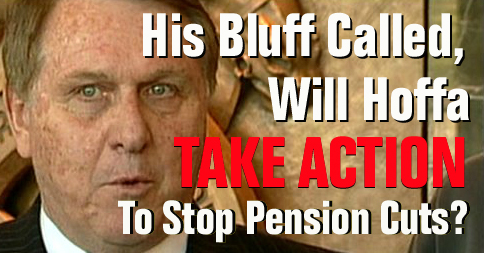 Central States Pension director Thomas Nyhan took just one day to give James Hoffa a flat “NO." Nyhan told Hoffa there will be no changes and no review of the pension cuts planned by the Central States Trustees. He says the “rescue plan” of cuts will be announced before the end of October.

Nyhan took the hardline in response to Hoffa’s letter of a day earlier. So, will Hoffa now finally take action, using his power as the General President of the Teamsters, or is this all an act?

We will find out on October 2. That’s the day that the Central States will hold a briefing for local officers on its pension cut plans in Rosemont, Illinois.

If Hoffa is for real, he will be at the October 2 meeting to draw a line in the sand against the pension cuts. Under the law, that plan must be put to a vote of Teamster members and retirees.

If Hoffa is serious about stopping pension cuts, he will square off with Nyhan on October 2 and make it clear that he will bring the full resources of the International Union to bear to mobilize an overwhelming No Vote to reject the cuts.

On October 2, Hoffa and these officials can form a united front to deliver an overwhelming No Vote against the cuts.

If they do so, Teamsters for a Democratic Union will work with the Hoffa administration to Vote No against the Central States plan.

If Hoffa’s letter is another campaign year PR stunt, he will be missing in action on October 2 and there will be no Vote No campaign out of the IBT. He will send his VP John Murphy for a photo-op statement.

MEMBERS CAN MAKE IT REAL

We all hope it will be real.  We can also help make it happen.

Tell your local officers you expect them to stand up at the meeting and say No.

Retirees and Teamsters will be in Rosemont on October 2 to remind officers that we are counting on them.

Get involved in the growing pension movement. Together we can let Teamster officers know that those who don’t defend Teamster pensions will be turned out of union office.