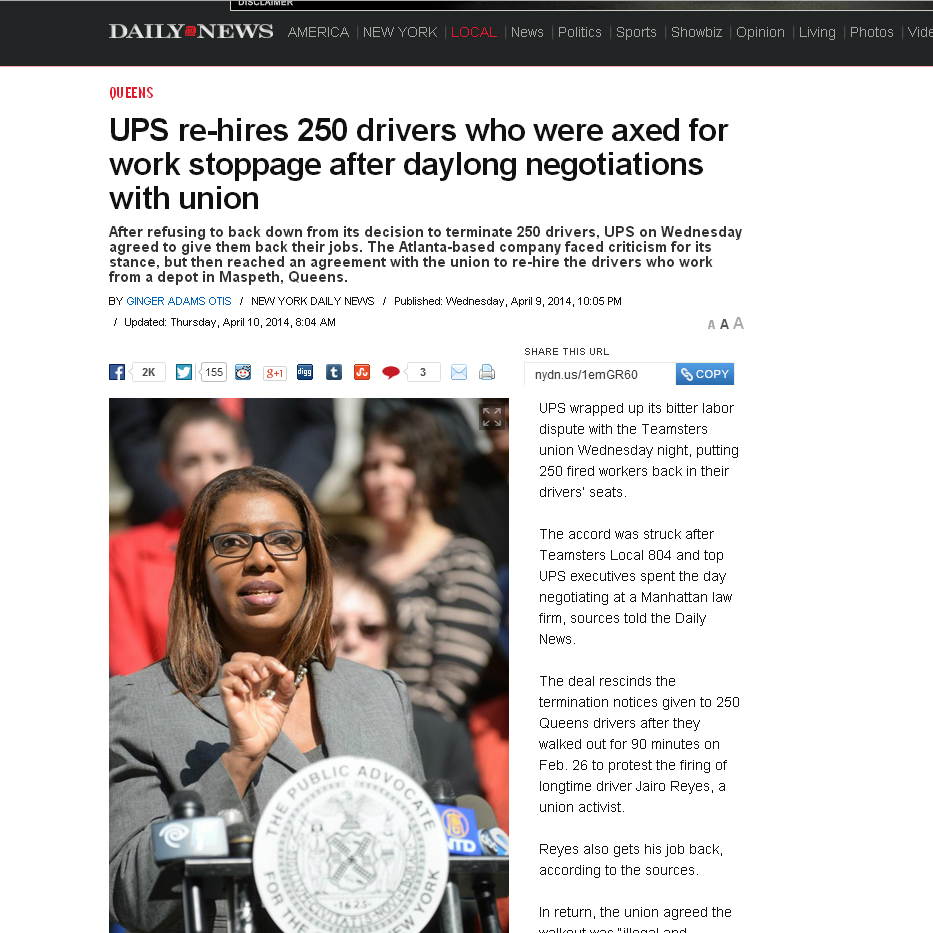 After refusing to back down from its decision to terminate 250 drivers, UPS on Wednesday agreed to give them back their jobs. The Atlanta-based company faced criticism for its stance, but then reached an agreement with the union to re-hire the drivers who work from a depot in Maspeth, Queens.
UPS wrapped up its bitter labor dispute with the Teamsters union Wednesday night, putting 250 fired workers back in their drivers’ seats.
The accord was struck after Teamsters Local 804 and top UPS executives spent the day negotiating at a Manhattan law firm, sources told the Daily News.
The deal rescinds the termination notices given to 250 Queens drivers after they walked out for 90 minutes on Feb. 26 to protest the firing of longtime driver Jairo Reyes, a union activist.
Reyes also gets his job back, according to the sources.
In return, the union agreed the walkout was “illegal and unauthorized,” said Andy McGowan, media relations director for UPS.
“The settlement includes the following actions: IBT Local 804 agrees to compensate UPS for damages associated with the loss of productive employee time, other company costs and the negative impact on goodwill relating to the February 26 unauthorized walkout and related actions,” McGowan said.
The union agreed to pay the company undisclosed damages for deliveries missed during the 90-minute walkout. In addition, all the drivers who participated have to serve a short suspension, sources said.
"We're looking forward to turning the page and writing a new chapter.  The drivers delivered their message to UPS about unfair treatment. Now every one them will be back delivering packages," said Tim Sylvester, Local 804 President.
But the union also maintained that its Feb. 26 action was legal under its contract with UPS.
"Under the agreement reached yesterday with UPS, Local 804 acknowledges that the union’s internal procedures for authorizing a strike were not properly followed on Feb. 26 and we have agreed to communicate the proper procedure to all union members," Local 804 said in a statement. "The work stoppage ... was legal under the union contract with UPS."

The Atlanta-based shipping company had played hardball with Local 804, refusing to back down from its position that it had the right to fire any worker who participated in the work stoppage. UPS had removed 36 workers from the payroll at the Maspeth depot in the past two weeks.

After negotiations failed last month, the union turned to elected officials and UPS customers for help.
Public Advocate Letitia James wrote the company a letter, reminding it that it had a $43 million contract with the state — as well as other perks, including city parking ticket privileges that saved it millions.
“Today we are celebrating a victory for working-class New Yorkers. The 250 truck drivers at the UPS facility in Maspeth who were in jeopardy of losing their livelihoods will now have their jobs reinstated,” James said Wednesday night. She thanked those who supported the workers and added “We have sent a clear message to corporate America that firing workers en masse for minor workplace disagreements is unacceptable.”
The state Working Families Party also rallied to the union’s cause, launching a petition drive that amassed 100,000 signatures, said Bill Lipton, the party’s state director.
"Working Families was proud to support the Teamster members who ran an inspiring, relentless campaign to mobilize hundreds of thousands of supporters to defend 250 workers and their families,” Lipton said.
UPS, which employs 6,000 union workers citywide and 16,000 across the state, said it valued its business with New York and hoped to maintain its good relationship.
But the company said it couldn’t condone walkouts like the one Feb. 26 because they put its customer relations in jeopardy.
Some customers, however, let the company know they didn’t approve of the decision to fire the drivers.
“You’re firing 250 drivers/workers and guess what? I’m firing you!! I’m boycotting UPS until these people are rehired!!” customer Rose Mary Rios wrote on Facebook on Wednesday, before the agreement was announced.
“Stop firing drivers in retaliation,” wrote Leon Laporte, in one of several dozen messages left in support of the workers.
Click here to read the original article at the NY Daily News.
UPS NY-NJ TDU media
Do you like this post?
Tweet
Get Advice Join TDU Donate