An ongoing strike by Hong Kong dock workers demanding a pay raise and protesting arduous working conditions is delivering a costly blow to the city's port operators and winning widespread support from the public.

A few hundred workers began to camp inside the docks on March 28, 2013 after subcontractors for Hutchison International Terminals (HIT) which runs the docks, rejected their demand for a 100 Hong Kong dollars [12.88 US dollars] or 20 percent pay increase per eight-hour shift. The subcontracting companies countered with an offer of 5 percent, far below what workers expected. A survey among dock workers showed that they are willing to settle with a 10 percent [zh] rise.

The workers, some of whom work 24-hour shifts, said that they haven't received raises since 2003 and their current salary is lower than what was paid in 1997.

A judge has since rule that the striking workers cannot enter the ship terminals; protests continue on the street outside the entrance.

According to HIT, the strike is costing the company five million Hong Kong dollars [644,000 US dollars] a day.

Hong Kong is the third busiest container port in the world, growing more than 50 percent between 2000 and 2012. But the growth has brought with it deteriorating working conditions because of what workers claim is exploitation by subcontractors.

Click here to see a video by Yiuman Fung from inmediahk.net showing the strike on April 1, 2013: 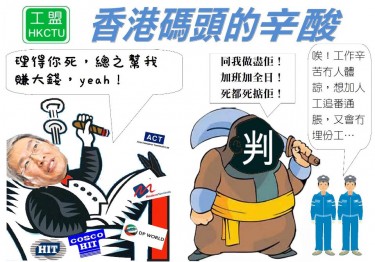 Stories of worker mistreatment have circulated on social media and citizen media, alerting the public to the miserable working conditions at the docks.

Since September 2012, dock workers started sharing their hardships on a Facebook page dedicated to collecting their stories. On October 2, 2012, one worker wrote:

The income of a security guard is now more than 10,000 Hong Kong dollars [1,288 US dollars] per month. As a specialized operator of heavy machinery such as crane operator, our monthly salary is 470 HK dollars [61 US dollars] x 26 days = 12,200 HK dollars [1,572 US dollars] And we have to work continuously for eight hours without a meal break.

There are no benefits and after a few years, you develop pain all over your body and there is no medical insurance.

Do you want to remain cheap labor? Wake up crane operator drivers, please reflect on the situation. 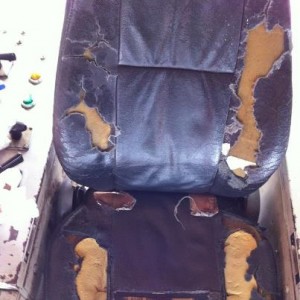 One worker uploaded a photo of the shabby crane operator seat [zh] that he is provided to Facebook on November 26, 2012:

I have to sit on it 12 hours a day. I will develop back problems in the long run.

The management class have 3-4 months bonus at the year end.

But they refuse to change the seat to save a few hundred dollars.

After a container truck driver died in his diver seat on January 19, 2013, a worker uploaded the news and commente

This is a warning. Low salary and long working hours at the dock
If you are sick, rest, don't risk your life. Rest in peace, fellow worker.

Student activist Willis Ho described [zh] on inmediahk.net the working conditions of subcontracted dock workers and explained why HIT, a company under Hutchison Whampoa Limited, the largest dock operator in the world, is the main target of the strike:

HIT is working with five subcontractors, including Yin Chong, Luen Wing, Ko Bo, Wing Fung, and Pui Kei to hire workers responsible for managing cargo, packing up the cargo, driving the crane operators, connecting the crane with containers, driving trucks, and double checking the cargo. The workers are divided into subcontract workers and company workers. Company workers are hired by HIT under Lee Kar Shing's business empire. They have better fringe benefits and more job security, for example they work one shift per day and are paid monthly (usually they have 17 monthly payments in one year), meal time break, year-end bonus, etc. As for the subcontracted workers, they are hired by the second or third tier subcontracting companies. Their working time is 16 to 24 hours (two to three shifts) and paid by shift. For every 24 hours, they are paid around 1,115 HK dollars, approximately 144 US dollars. Every shift has different pay. As for fringe benefits, subcontracted workers do not have meal time, medical insurance, or bonuses. 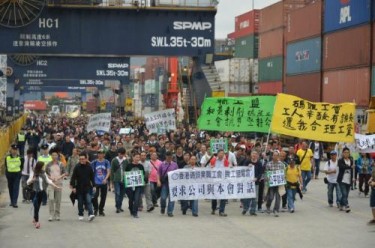 Just try to imagine a person working round the clock for 24 hours around docks 4 and 6 and 7 and 8 (note: the docks are owned by HIT), day and night. The reality is for the dock workers who are responsible for arranging and packing up the cargo, they are working in this manner, continuously for 24 hours in three shifts. […] At peak time, such as before and after holidays, subcontractors will force the workers to work overtime for 72 hours in order to avoid hiring more workers. […] The dock workers responsible for the cargo managing and packing who work continuously for three shifts only are paid 1,115 HK dollars [144 US dollars], lower than the 1,480 HK dollars [191 US dollars] paid back in 1997. In other words, their hourly paid is just 50 HK dollars [less than 7 US dollars].

The dock workers’ plight has won sympathy from members of the general public. Many have shown their support with photos such this one: 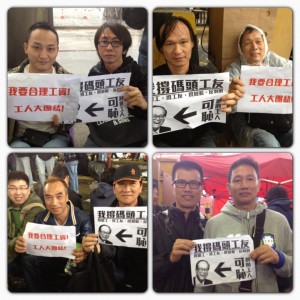 Student volunteers have collected supplies [zh] such as rain clothes, sleeping bags, and bottled water for the striking workers. The Hong Kong Confederation of Trade Unions has also set up a fund to support the striking workers and has so far collected 1.4 million HK dollars [180,328 US dollars].