These are just some of the ways Walmart has retaliated against their workers who have spoken up for their rights.

Workers like Vanessa Ferreira, who worked at Walmart for 8 years, until she was fired earlier this month -- having done nothing wrong beside standing up for herself and her coworkers.

Or workers like Carlton Smith, a Paramount, California Walmart employee of 17 years, who was just fired for speaking up to make positive change.

So today, Walmart workers across the country are on strike, standing up against Walmart's retaliation against and attempts to silence those who speak out.

They'll be caravanning to Bentonville, Arkansas -- what they're calling the "Ride for Respect" -- to bring their complaints directly to the Walmart shareholder meeting on June 7th.

And the more of us who stand with them right now, the louder their voices will be.

Sign their petition to Walmart today, and it'll be delivered to Walmart HQ during the shareholder meeting. 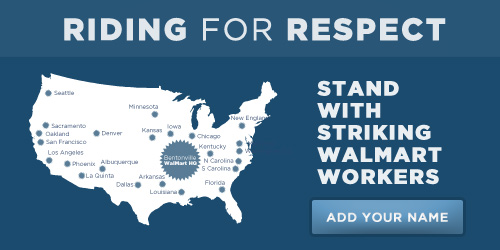 Even though Walmart makes more than $16 billion in profits each year, the retailer is creating jobs that keep its workers without enough hours, without healthcare, and struggling to get by on poverty wages.

As a result many employees can't even support their families without relying on government assistance, while the Walton family, which controls the company, has the wealth of 42 percent of American families combined, and its CEO rakes in more than 1,000 times the salary of the average Walmart worker.

That's why workers have been calling on Walmart to publicly commit to offering full-time hours and a minimum salary of $25,000 -- and why your support is so important. Because we know what happens to workers when they speak out -- just ask Vanessa or Carlton.

The "Ride for Respect" -- to take their concerns directly to the executives and shareholders who could make change happen -- will be a huge effort.

And having you with the workers from the start will make a huge difference. Add your name today: http://action.changewalmart.org/strikers