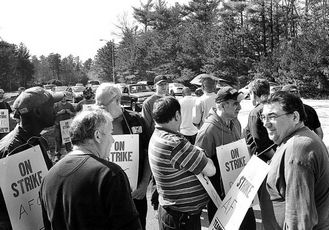 About 30 workers wearing "strike" placards around their necks were at the park. However, union representatives on site would not comment on the nature of the strike.

One of the strikers attempted to speak to a Standard-Times reporter before being yelled at by a union organizer not to comment.

Tom Davis, executive director for Greater New Bedford Industrial Foundation, which manages the park, said in his 14 years with the nonprofit he has yet to see a serious strike.

At least two Dartmouth police officers were on scene but would not provide comment.

Phone calls to AFC Cable and Teamsters Local 59 were not immediately returned.

According to a Jan. 20, 2013, story in the SouthCoast Business Bulletin, part of the SouthCoast Media Group, the company — which manufactures electrical cables for commercial buildings — has seen a revival under private equity ownership.

Company president Robert Pereira said AFC Cable, which makes cables at two of its New Bedford Business Park manufacturing facilities, as well as in Florida, Ohio and California, has seen "significant growth" in both revenue and market share over the past two years.

He credited the resurgence to the company's acquisition in December of 2010 by private equity firm Clayton Dubilier & Rice which purchased AFC along with another group of companies in the electrical marketplace. That company, including AFC Cable, is now collectively known as Atkore International and is based in Illinois.