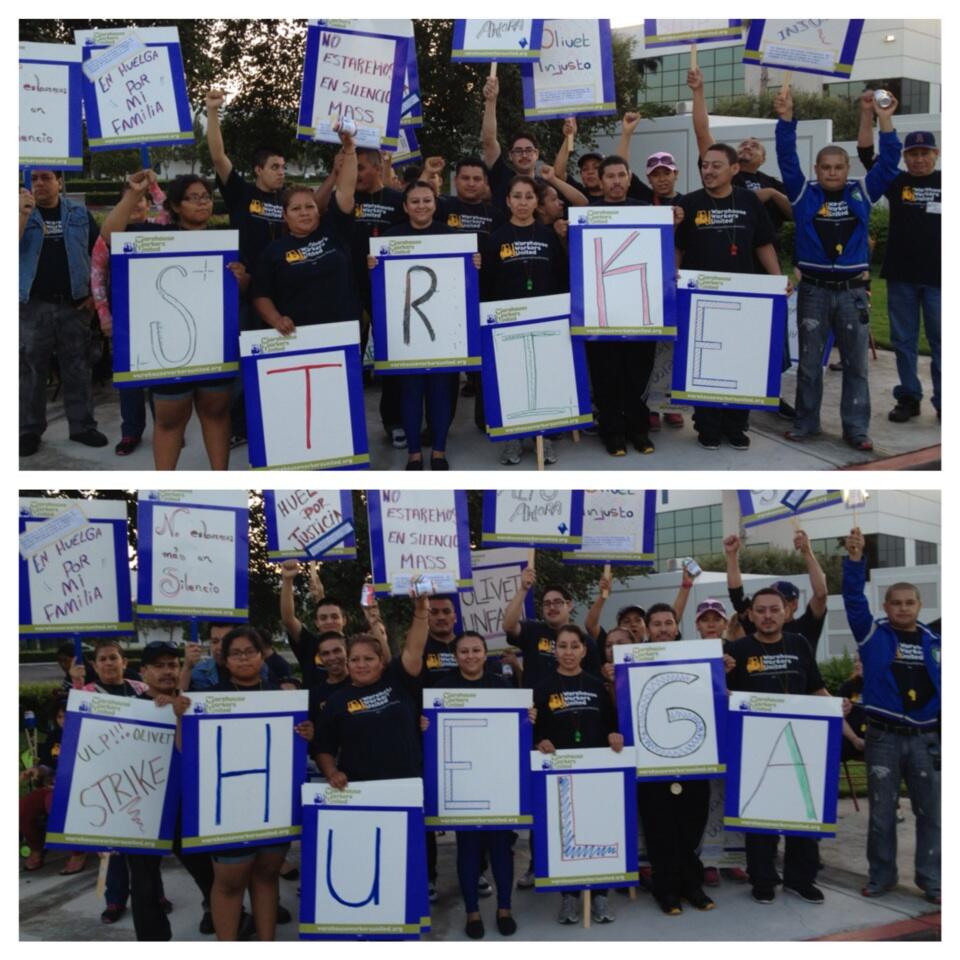 At 5 AM PST today, non-union workers moving Walmart goods at a California warehouse plan to launch a two-day surprise strike in protest of alleged retaliation for exposing safety risks. Organizers expect at least thirty of the warehouse's two hundred-some employees to join the work stoppage, the latest in a wave of Walmart supply chain strikes.

"I'm scared because I need to work for my family's sake," employee Miriam Garcia told The Nation in Spanish. Garcia said she worried that the strike could cost her her job. "But I don't want me or my co-workers to keep working in these conditions."

The Mira Loma, California, warehouse is operated by Olivet International, an apparel and luggage company. Employees say management told them in a mandatory meeting that about 70% of the product the facility moves is for Walmart, and workers charge that the retail giant bears responsibility for alleged abuse there. As The Nation has reported, Walmart has faced increasing scrutiny over labor conditions of sub-contracted workers in its supply chain, both within the United States and abroad. "I think they have a lot of responsibility," warehouse worker Heidi Baizabal said in Spanish. "They need to see the conditions we're working in. Because even though we don't work directly for Walmart, we're moving their merchandise."

Olivet did not respond to Monday or Tuesday requests for comment regarding the workers' allegations. Reached by e-mail Tuesday, a Walmart spokesperson did not directly address the safety or intimidation allegations, but said the warehouse "isn't a Walmart or Walmart dedicated facility."

Today's strike is backed by Warehouse Workers United, a project of the Change to Win union federation. It comes two months after twenty-one Olivet warehouse employees filed a formal complaint with the California Division of Occupational Safety and Health, alleging rampant safety violations: emergency exits blocked by boxes and merchandise; forklift brakes, seatbelts, and horns that don't work; workers loading shipping containers in the dark; triple-stacked and unsecured boxes; lack of ventilation or adequate water amid intense heat; "a risk of workers being hit by forklifts"; and workers "trapped inside trailers as they drive off."

"It's important that I make it home to my family safe, in good health, Garcia told The Nation. "I don't want to get injured [at work] like my other co-workers." Along with "a good salary," said Baizabal, "we want simple things we have the right to, like clean water." She said that workers' repeated efforts to address issues with Olivet had proven a dead end: "For me, it took a lot of courage to go to managers with our concerns. And then we kept doing it, and every time, they ignored us."

Following the May filing of the complaint – which included fifteen photos taken by workers – activists allege that Olivet responded with an intimidation campaign. "They're watching us all the time," said Baizabal. Workers charge that management has installed twenty-nine surveillance cameras and begun following activist workers. They allege that the company has retaliated by cutting employees' hours and implied that they could lose their jobs. And they say Olivet instituted new rules restricting health and safety discussions, and regular meetings to discourage organizing.

Today's strike follows work stoppages by workers at two other Walmart-contracted warehouses last fall – one at another Mira Loma facility, and the other at the Walmart distribution center in Elwood, Illinois, which organizers say handles the majority of Walmart imports to the United States. It comes as Walmart faces a new high-profile challenge to its business model – a "Large Retailer Accountability Act" passed by the Washington, D.C., City Council and currently awaiting a signature or veto by Mayor Vince Gray.

The Mira Loma warehouse strike also follows strikes by the union-backed retail workers group OUR Walmart, including a several-day walkout last month during which a hundred-some workers traveled to Arkansas for protests pegged to the company's hometown shareholder convention. The retail workers' campaign now faces perhaps its greatest challenge to date: Alleged retaliatory discipline against sixty worker activists since the June strike, including the firing of nineteen strikers. (Walmart denies singling out strikers.) While OUR Walmart held a rally (not a strike) against the alleged retaliation earlier this month in Los Angeles, the group's main response has been a series of protests targeting members of Walmart's board, including Yahoo CEO Marissa Mayer – an apparent effort to make Walmart's alleged crimes a liability for the high-profile tech titan. OUR Walmart actions this week are targeting Williams Capital Group CEO Christopher Williams and Community Foundation of San Francisco Chair Aída Álvarez, who also sit on Walmart's board.

Striking workers plan to rally outside the Olivet warehouse at 11 AM PST today. "We wanted to strike so they would listen to us, so that they'd hear our voice," said Baizabal. She added, "We've felt violated for a long time."