With one million low-wage workers in core Teamster industries from warehousing to package delivery, Amazon poses an existential threat to good union jobs.

What will it take to meet the Amazon challenge? 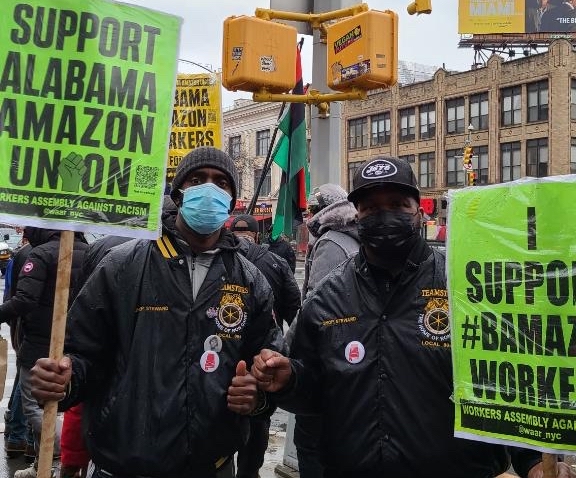 The Teamster Convention adopted a resolution to make building union power and winning a union contract a top priority for our union. That’s a heavy challenge.

Amazon is the world’s fastest growing employer with more than one million workers in the U.S. and climbing.

We need to help Amazon workers drive up their wages, benefits, and power or we will be dragged down in a race to the bottom.

Until 2012, Amazon’s business model focused on warehousing and selling goods and used UPS and other companies to ship to their customers.

Since then, Amazon has rapidly expanded into sorting and delivering its own packages, directly competing with UPS.

Workers at Amazon sortation centers, equivalent to a UPS hub, are part-timers. Amazon hiked part-time starting pay to $15 - $17 an hour this year, and crappy benefits.

Delivery drivers don’t work for Amazon. They work for small subcontractors (called Amazon service providers) for $15 an hour or are “Amazon Flex Drivers”— the name that Amazon uses for self-employed personal vehicle drivers.

Organizing Amazon is not something that is going to be won shop-by-shop or through the typical NLRB election process.

The Teamster Convention resolution says organizing Amazon will require supporting shopfloor militancy by Amazon workers, solidarity from warehousing and delivery Teamsters, partnerships with unions and the community, and mobilization of the rank and file.

What could a Teamster program to take on Amazon look like in practice?

Salts are organizers who get jobs at an employer to organize with other workers and build shopfloor power from the inside.

Right now, there are dozens of grassroots organizers who have gotten jobs at Amazon to promote workplace organizing.

Some Amazon workers have organized job actions and even work stoppages to fight for paid time off, sick leave, COVID-19 health and safety, and other issues.

The IBT can support the organizing that workers are doing now and recruit, support and coordinate the activities of hundreds of salts nationwide and in targeted Amazon facilities.

2. Connect Amazon Organizing with Our Work at UPS

Right now, there is no coordination between the IBT Package Division and our union’s organizing work at Amazon. That makes no sense.

A militant contract campaign and successful strike at UPS could inspire Amazon workers to want to join the Teamsters.

Non-union workers want to join a union that is fighting back. It’s hard to recruit new members if you’re selling out the ones you have.

The IBT has started a training program in local unions. It needs to be massively expanded.

Volunteer organizers could back up salts and workplace organizers, do worker-to-worker organizing, and support actions at Amazon, including strikes and job actions.

Unlike workers under a union contract, Amazon workers have a legally protected right to strike at any time.

The most strategic time to disrupt Amazon operations with strikes and protests is peak season when the company is stretched thin.

In partnership with Amazon workers, community groups, and other unions, we need to build the capacity to disrupt Amazon’s ability to deliver to customers across a metro area and ideally multiple metro areas.

This will take time, and multiple efforts, but it’s what it will take to win economic gains and a union at Amazon.

5. Dig in for the Long-Term

There is not going to be any one-off win at Amazon.

Our union needs to commit real resources, take on fights, coordinate with locals and joint councils, build partnerships with unions and community groups, develop capacity over time, and most importantly involve the Teamster rank and file.

The Teamster Convention voted to fully fund and support the Amazon Project and to create a special Amazon Division to aid Amazon workers to defend and protect the standards in our industries from the existential threat of Amazon.

That’s the right direction. Now it’s time to get to work.