Airline Division: Time for a Change

September 15, 2011: At the official debate for candidates for Teamster president, two of the three present were stumped when asked what to do about the recent contract rejection by 5,000 United Airlines Teamster mechanics. Ken Hall and Fred Gegare punted, because it was clear they didn’t know anything about it. Sandy Pope addressed the issue of bargaining with a profitable corporation that previously got deep concessions when it was in bankruptcy.

That sums up the situation in the airline division: an International Union that is on the sidelines at best, instead of leading.

Teamster mechanics at United Airlines and Continental will soon be merged, a unit of nearly 10,000 members.

The United Airlines contract is a crucial pace-setter, and the International should be mobilizing for a good contract, as they did when the Teamsters competed with other unions to get the mechanics into the union. A good start would be a bargaining committee responsive to the members.

Mechanics at both carriers are campaigning for Sandy Pope, and for a leadership with a plan and commitment to the airline members.

“We’re kept in the dark. We don’t even know if the International will change the negotiating team after the contract rejection.

“The company has a plan, and our union needs to have a plan. That’s why we’re backing Sandy Pope,” said Mike Albertin, a chief steward for United Airline mechanics in Locals 856 and 986 in San Francisco.

At Republic Airline Holdings, 3,000 Teamster pilots are bargaining with a management that is writing the book on stalling and regressive bargaining. Presently they are retaliating against the pilots with the threat of lay-offs, even though they need more pilots. (Republic operates as Chautauqua, Frontier, and Shuttle as well as Republic.) These Teamsters need an active, aggressive Airline Division to back them up.

Sandy Pope stated, “We have real power if we take seriously our position in trucking, distribution, rail and airlines. That's what I intend to do." 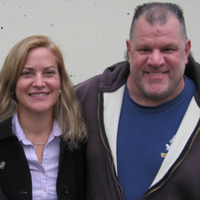 “We’re kept in the dark. We don’t even know if the International will change the negotiating team after the contract rejection. The company has a plan, and our union needs to have a plan. That’s why we’re backing Sandy Pope.”