Corruption and the Fall of Jimmy Hoffa: An Inside Story from the Man Who Claims He Killed Hoffa 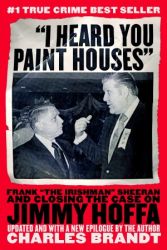 Review: "I Heard You Paint Houses": Frank 'the Irishman' Sheeran and the Inside Story of the Mafia, the Teamsters, and the Final Ride of Jimmy Hoffa.

"I heard you paint houses." Those are the first words Jimmy Hoffa ever spoke to Frank Sheeran, who would become a top Teamster official in the 1960s and '70s as well as a hired killer for Hoffa and the mob. The words refer to the splatter of blood when the deed is done.

Hoffa hired Sheeran in that first telephone conversation as an "organizer," on the recommendation of Russell Bufalino, the Mafia boss of Pennsylvania.

I Heard You Paint Houses is Sheeran's story of his life with Hoffa and in the mob, as told in hundreds of hours of tapes to one of his former attorneys, Charles Brandt. There have been too many books on the mob and on the Hoffa era in the Teamsters, most of them terrible.

This one is worth reading. Sheeran was close to Hoffa, and gives an insider's feel for the intimate relationship of Hoffa and the Teamster leadership to the mob.

Hoffa created a local union for Sheeran: Delaware Local 326 was carved out of Philadelphia Local 107, with Sheeran installed as president. He was identified as a mob leader in the 1987 RICO lawsuit against top Teamsters that led to the present-day consent order.

It's an easy book to read, and even fun, if that's an appropriate word for a book about murder and union corruption. Sheeran and Brandt (half the book is taken verbatim from the Sheeran tapes, the rest written by Brandt) don’t romanticize the mob; to "The Irishman", it's just a business and the way he lives. He matter of factly describes killing three people in one day and then he "met up with Jimmy to give him the report."

There is considerable coverage in the book of Hoffa's trials. Hoffa was tried for taking payoffs from carhaul employers, and got a hung jury by bribing several jurors. His co-defendant was Bert Brennan, his business partner in the scams that sent him to prison. Brennan's son Larry currently heads Michigan Joint Council 43.

Then Hoffa was tried and convicted in 1964 for the jury tampering, and also convicted by a Chicago jury of defrauding the Central States Pension Fund to line his own pocket in a Florida land scam. His appeals ran out in 1967 and he entered Lewiston Prison to serve a combined 13 year sentence.

The chapters on the trials show Hoffa as master strategist and as a brazen crook who used threats and bribes routinely. And they show that his famous ego could be his weakness.

Why Hoffa Was Murdered

James P. Hoffa, the current Teamster president, likes to say the mob killed his dad. It's half true. Mobsters killed Hoffa for sure, but Hoffa was a part of their operation.

Sheeran makes very clear who their victims are: they kill their own. Mainly they kill mob insiders who they fear have information that may be used against them.

Hoffa was too eager to get back into office, and they felt he would trade information in exchange for lifting the restrictions put on him to stay out of the union when Nixon pardoned him in December 1971.

Sheeran adds some details to what is already well-known about the corrupt relationship between Hoffa and the Nixon administration. Sheeran himself delivered a suitcase of money to the home of John Mitchell, the Attorney General who later went to prison himself for Watergate crimes.

After Hoffa left prison in 1971, Sheeran claims he was a changed man. More "puffing," as Sheeran calls it, about what he would do to whom, even though his power was gone. That "puffing" scared top mobsters; it made them think he would make a deal with the Justice Department. That's why Russell Bufalino co-ordered the hit on Hoffa.

Sheeran believes the 1972 book by Kennedy aide Walter Sheridan played a role in the Hoffa murder. That book revealed that Hoffa had snitched to the FBI on Teamster President Dave Beck to help send Beck to prison and Hoffa into the Marble Palace. Bufalino and other Hoffa associates feared that once again he would turn FBI informant to get into the Marble Palace.

That's the FBI's view of the crime as well. Sheeran adds one new twist: that he himself, not Salvatore "Sally Bugs" Bruguglio, pulled the trigger on July 30, 1975. The other new tidbit is a Detroit home address where Sheeran says the Teamster president was killed. (The owner of the house now has a website, apparently shopping for his 15 minutes of fame.)

Whose Union Is It?

I spoke with Dan Moldea, author of The Hoffa Wars, the authoritative 1978 book on Hoffa and his era, about Sheeran's book. Moldea thinks Sheeran embellished the story by making himself the trigger man, but that otherwise there's a lot to learn from the book. It adds some details and intimate connection to Hoffa that only an insider can provide.

Teamsters interested in how the Teamsters Union became corrupted should read it. While mob influence in the Teamsters (and in the USA overall) is lower today, the culture created then lives on inside much of the Teamsters.

Hoffa became obsessed with saying of his former flunky and successor, Frank Fitzsimmons "It's not his union, it's my union."

The idea that the Teamsters belongs to any general president or official is a legacy of the mob era that Teamster members continue to struggle against today.