Freight Teamsters: No Time to Give Up

September 11, 2009: Freight Teamsters are being hit hard, but thousands of members are ready to work together to Dump Hoffa and turn our union around. 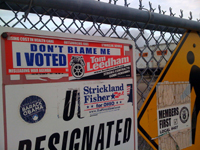 A popular sentiment at the YRC terminal in Cleveland.Most of the 35,000 Teamsters at YRC are now working for 15 percent below the national contract, and getting no pension credits.

It’s discouraging to be hit hard by your employer and find your International Union leadership helping the employer beat you up.

But freight Teamsters are not a weak bunch, and many are mad enough to do something about it.

Thousands of freight Teamsters—however they voted on the concessions—are ready to work together to Dump Hoffa and help turn the Teamsters Union in a new direction.

Freight drivers are a minority of Teamsters, but standing together they have the power to reach other Teamsters and put the union back on the right track.

In August, New Penn Teamsters voted to reject the second round of concessions.

YRC management threatened to close down the operation if members didn’t vote for concessions—and the International Union backed them up.

In the re-vote, New Penn Teamsters voted by a 890-329 margin to approve YRCW’s concessions.

It was not surprising that most Teamsters reluctantly voted Yes, after the threats that were handed down to the nearly 2,000 Teamsters. The concession deal was still rejected in Boston Local 25 and Philadelphia Local 107.

Will the Concessions Save YRC?

Teamsters have done more than enough to help management, which is the real problem at YRC.

At the insistence of the IBT, Zollars has brought on board Richard Williamson as the new Chief Strategy Officer.

We all hope that he can help straighten management out.

Several Teamsters pointed out that Williamson has all his bases covered: he’s a member of the Turnaround Management Association (TMA) and also the American Bankruptcy Institute (ABI).

Meanwhile, YRC and the International Union are still working to pressure all YRC Teamsters to accept the latest concessions.

For up to date information on the status of YRC bargaining at Reddaway in the Northwest and the big Chicago units in Locals 705 and 710, and other freight issues, check www.tdu.org.

Are you ready to do your part to elect new leadership and turn our union around? You’re not alone.

This month, Teamsters from across our union are launching a national campaign to Dump Hoffa. Check out DumpHoffa.org to sign up for the campaign army and order your Dump Hoffa gear.

Want to Dump Hoffa? Be at the TDU Convention

“Freight Teamsters alone can not vote out Mr. Country Club, Hoffa Jr. But we can organize to support and help elect a viable candidate that will do more than just spin PR.

“Find out how and much more at this years TDU Convention. I’ve set a goal of inviting five Teamsters from my area.”