December 2, 2010: Are you thinking about running for delegate to the Teamster Convention? Now is the time to get started.

Almost all Teamster locals will hold an election early next year for delegates and alternate delegates to attend the Teamster Convention, which will be held in Las Vegas on June 27 – July 1, 2011.

Why delegates are important

The Convention will nominate candidates to run for Teamster president, and all the vice president positions. Sandy Pope, running for General President, needs the support of five percent of the delegates to get on the ballot.

The Convention also has the power to review and amend the entire Teamster Constitution. Reform delegates will put forward specific changes to make our union more accountable to members, and all delegates get a vote.

How delegate elections are different

Delegate elections are a lot like any other Teamster elections—you’ll need to win support from members and turn out the votes you need to win.

But there are some differences:

Many members find it easier to run and win for delegate than they do in a normal local union election.

How do you start planning your campaign?

Start with your goal: winning your election. Then ask yourself what you will need on the day the ballots go out to win:

How much money do you need? Make a budget and figure out how much you’ll need for campaign mailings, events, t-shirts, stickers, and more. 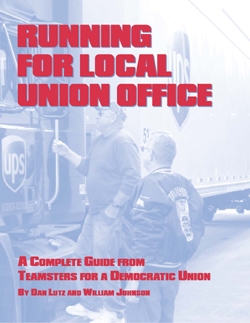 Get help from TDU

TDU has decades of experience running winning campaigns for local office. And TDU is your source for information on your rights and how to enforce them.

Contact TDU for advice or to set up a workshop on running for delegate in your area.

TDU’s new book Running for Local Union Office is the handbook for running a winning campaign. Click here to order your copy today.