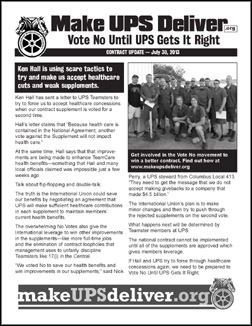 UPDATED July 30, 2013: Ken Hall's letter on UPS contract negotiations shows both the power of the Vote No movement and the IBT's determination to try to force through healthcare cuts.

Hall's statement claims, "Because health care is contained in the National Agreement, another vote against the Supplement will not impact health care."

At the same time, Hall says that improvements are being made to enhance TeamCare health benefits—something that Hall and many local officials claimed was impossible just a few weeks ago.

Hall's double-talk and flip-flop shows both the power of the Vote No movement and the determination of the Hoffa-Hall administration to force the concessions they gave to UPS despite the company’s record profits.

Many members have reacted to the letter with anger. "We voted No to save our health benefits and win a better contract," said Nick Perry, a UPS steward from Columbus Local 413. "They need to get the message that we're not accepting givebacks to a company that made $4.5 billion."

The International Union's plan is to try to push through a Yes Vote on the supplements in a second round of bargaining by making minor enhancements in the supplements, while telling members it's impossible to maintain the same level of healthcare benefits.

The truth is that absolutely nothing stops the International Union and UPS from negotiating an agreement to maintain members' health benefits at the same level.

Without touching the national agreement, the International Union could bring the Supplemental Negotiating Committees together to demand that UPS make sufficient healthcare contributions in each supplement to maintain members' current health benefits.

What happens next will be determined by the rank and file at UPS. Hall is hoping that members fall for his scare tactics and accept the supplements.

The national contract cannot be implemented until all of the supplements are approved which gives members leverage. But that leverage will only save members' health benefits and win other contract improvements if the Vote No movement has enough strength to reject the concessions in a second round of voting on the supplements.

If you've read this far, you obviously care about this issue. Take the next step. Click here to download this Contract Update as a leaflet and pass out copies to other Teamsters.

Click here to send us a message and volunteer to help build the Vote No movement to win a better contract.