Teamsters for a Democratic Union (TDU) is an organization of working Teamsters like you. For 30 years, TDU members have worked to win strong contracts and benefits in freight and at UPS.

We believe in our union and in getting involved to make it better. We encourage you to do the same.

Find out about the contract. Don’t hesitate to ask questions or raise your concerns. Work with your stewards to enforce the contract. Our union is only as strong as we make it.

If you’ve got a question about your rights or how to enforce them, contact TDU.

We are Teamsters helping Teamsters have a voice on the job and in our union.

“This first contract is just the beginning. Teamsters at UPS, Yellow-Roadway, and UPS Freight can win better contracts and benefits across the trucking industry if we’re united, informed and involved.”
Al Wilkins, Local 480
Roadway, Nashville

Power and Respect on the Job

“Being union is about getting respect and a say-so on the job. TDU is where Teamsters turn to learn more about enforcing their contract. If you’ve got questions about your rights, TDU is the place to turn.”
Barry Strohl, Local 509
Roadway, South Carolina

A Voice in Our Union

“In TDU, we believe in Teamster Power and in working Teamsters having a voice in our union.”
Dan Scott, Local 174
UPS, Seattle

Teamsters for a Democratic Union:
Your Information Source

Teamsters for a Democratic Union:
A Proven Record of Success

TDU was founded in 1976, initially by UPS and freight Teamsters. Our mission is to build a a stronger Teamsters Union by empowering the membership. And we’re doing it!

TDU won the right for direct election for top Teamster officers. Today, we’re working to preserve our right to elect top officers by one-member, one vote.

TDU has won better pensions for many Teamsters, including 25-and-out. Today, we are working to defend and improve members’ pensions and health care.

TDU has won caps on the salaries of top union officers. We're working to eliminate multiple salaries for Teamster officers and reduce dues waste and put all our dues money to work building a stronger union. 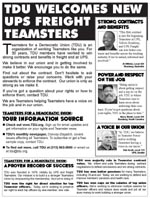