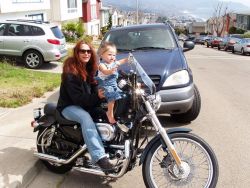 September 14, 2012: I really enjoyed the Women's Conference, my first one.

The speaker that stands out mostly for me was the San Francisco Fire Chief Joanne Hayes-White, it was very uplifting. I recall when she was sworn in as the first women fire chief in 2004.

I had a hard time picking out my favorite workshops because they were all important. My first work shop was, "It's OK to be OK" which was about overcoming workplace trauma. I went there hopeful to gain some tools for myself and my co-workers. The environment at VWR, where I work, can be scary. People go off on each other daily and many have lost jobs. What I got out of the class "It's OK to be OK" was to keep my co-workers laughing. We are all victims at work and even outside of work. Stay strong and be a survivor, not a victim.

Second workshop was history on Eleanor Roosevelt and the American worker. I loved it. We need to learn about our past. I chatted with the instructor, Brigid O'Farrell. We spoke briefly at the end. I said they need to teach labor history in school because they need to learn the struggle we went through to get where we are at. In the state of California labor history is allowed as a lesson in school, but not pushed. This is something to work on.

I joined other Teamster women for lunch with the Sandy Pope, president of Teamsters Local 805. It was an honor. It was truly a joy having lunch with her and other women, like Claudette Begin from Local 2010. We discussed basics on my workplace and how my co-workers have been without a contract for over two years. If anyone gets a chance, like I did, to hangout with Sandy, don't turn it down! She's really a great person and truly cares about our union and everyone she comes in contact with.

Sandy invited me to come along with her for dinner she was having with some Teamster sisters from Oklahoma. We all went site-seeing, shopping, and just had fun. She attracts good people. I can't wait to hang out again in New Orleans at next year's Women's Conference with all my new Teamsters sisters.