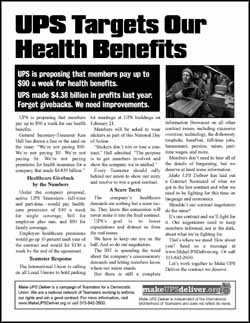 February 8, 2013: In an effort to put our union on the defensive in contract negotiations, UPS management has put a proposal on the table that members pay up to $90 a week for health benefits.

General Secretary-Treasurer Ken Hall drew a line in the sand on the issue on a national conference call of local officers yesterday and announced a series of union actions by the International and local unions.

Hall said that UPS has been told they must drop the proposal when contract negotiations resume or the union will pull the plug on early bargaining.

"We will walk away from negotiations and see you in July," Hall said.

Healthcare Giveback by the Numbers

Under the company proposal, active UPS Teamsters—full-time and part-time—would pay healthcare premiums of $30 a week for single coverage, $60 for employee plus one, and $90 for family coverage.

Employee healthcare premiums would go up 10 percent each year of the contract and would hit $130 a week by the end of the agreement.

These concessions come on top of the company's earlier proposal to hike monthly premiums for retirees covered by the company's retiree healthcare plans.

Management is also proposing dramatic cuts in coverage for all Teamsters—active and retirees—in company healthcare plans, including massive increases in deductibles and co-pays.

The International Union has scheduled a series of meetings and indoor rallies across the country to show the company that UPS Teamsters flatly reject paying any part of our healthcare premiums.

The International Union is also calling on all Local Unions to hold parking lot meetings at UPS buildings on Feb. 21. Members will be asked to wear stickers as part of this National Day of Action.

"Stickers don't win or lose a contract," Hall admitted. "The purpose is to get members involved and show the company that we're unified."

All Teamsters should stand behind the bargaining committee in saying a loud NO to members paying for our healthcare, including attending union rallies, parking lot meetings and other actions.

Keep Our Eye on the Ball

The healthcare giveback is nothing but a scare tactic. It needs to get off the table now so we can focus on the issues that matter to working UPSers: harassment, technology, excessive overtime, full-time jobs, pensions, and more.

UPS made $4.38 billion in profits last year. Management knows they are not going to get this concession in the contract.

Their goal is to lower expectations and distract us from the real issues. We have to keep our eye on the ball. And so do our negotiators.

The International Union is spreading the word about management's concessionary demands. But there is still an information Brownout on the contract issues that matter to members and our union.

Hall has held two conference calls with local officers, and one with shop stewards, and has said nothing concrete or specific about excessive overtime, technology, the dishonesty loophole, SurePost, full-time jobs, harassment issues or any other issue on the table.

Members don't need to hear all of the details of bargaining, but we deserve at least some information.

The IBT is releasing the specifics on the company's concessionary healthcare demands and letting members know just where our union negotiators stand: No Premiums, No Way.

Every Teamster should rally behind our union and say no to these givebacks.

But after we make the company pull these concessions off the table, then where will we stand?

TDU has laid out a Contract Scorecard of what we got in the last contract and what we need to be fighting for this time on language and economics.

Shouldn't our contract negotiators do the same?

It's our contract and we'll fight for it. Our negotiators need to keep members informed, not in the dark, about what we're fighting for.

Click here to get involved with Make UPS Deliver or to send us a message.