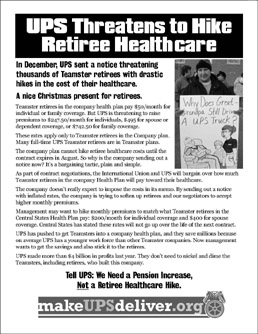 January 4, 2013: UPS management is flexing its muscles in bargaining. In late December they sent a notice threatening thousands of Teamster retirees in the company healthcare plan with drastic payment hikes.

The company plan cannot hike retiree healthcare costs until the contract expires in August. So why is the company sending out a notice now? It's a bargaining tactic, plain and simple.

As part of contract negotiations, the International Union and UPS will bargain over how much Teamster retirees in the company Health Plan will pay toward their healthcare.

The company doesn't really expect to impose the costs in its memo. By sending out a notice with inflated rates, the company is trying to soften up retirees and our negotiators to accept higher monthly premiums.

Management may want to hike monthly premiums to match what Teamster retirees in the Central States Health Plan pay: $200/month for individual coverage and $400 for spouse coverage. Central States has stated these rates will not go up over the life of the next contract.

UPS has pushed to get Teamsters into a company health plan, and they save millions because on average UPS has a younger work force than other Teamster companies. Now management wants to get the savings and also stick it to the retirees.

UPS made more than $4 billion in profits last year. They don't need to nickel and dime the Teamsters, including retirees, who built this company.

Teamster Convention Starts in One Week—Here’s the Agenda

The Teamster Convention will be held June 22, 23, 24, online. If you want to observe the IBT Convention, and see the work of the 1,600 elected delegates, here’s what you need to know.