Will Your Local’s Delegates Be A Voice for Working Teamsters?

They have the power to amend or rewrite our union’s constitution—for better or for worse.

They have the power to give members a choice in the Teamster election this November—or to make the event a coronation of Hoffa, who wants to extend his reign to 17 years.

Hoffa and his circle of advisers and handlers have a plan for the convention. Here is what it is:

Hoffa spends millions of dollars every year on multiple salaries—and political loyalty. But he will tell delegates that having an election once every five years is a waste of money. Democracy just gets in the way of having giving him a free pass toward 17 years in office.

At the 2006 Convention, Hoffa turned the hype machine to full blast to puff up his failing administration. In the biggest lie of the convention, he told delegates that he was holding in his hands a card-check agreement with UPS Freight—but he forgot to add that it only covered one terminal, and he had made a hand-shake deal to give away Teamster pensions and contract rights to UPS.

When it comes to silencing independent voices, Hoffa’s campaign will stoop to the lowest level. At the 2006 Convention, Hoffa’s campaign tried to boo and shout down every speaker who questioned or criticized Hoffa. They screamed at women delegates and used personal attacks instead of debating our union’s future.

His campaign made his supporters wear goofy red vests, so they could isolate and abuse the independent delegates.

Campaign-appointed “whips” patrolled the aisle and enforced discipline among Hoffa’s supporters—telling them when to boo, when to applaud, and how they should vote on every single issue with a thumbs up or thumbs down.

Hoffa will try the same tricks again. He’s been doing it for years—at the 1996 Convention, his supporters even booed the National Anthem and a moment of silence for fallen members.

What Happens in Vegas

Hoffa wants what happens in Vegas to stay in Vegas. Many members have a different idea.

Right now, independent members and local officers are running for delegate across the country to make sure that working Teamsters get heard on the convention floor.

They’ll go to speak out if Hoffa tries to raise our dues or take away our democratic rights.

And they’ll make sure that members get a choice this fall by nominating Sandy Pope to run against Hoffa.

In every convention since 1991, it has been the independent delegates, many of them in Teamsters for a Democratic Union, who have made history. They have won your democratic rights, including the Right to Vote. They have spoken truth to power. They have given rank and file Teamsters a choice for General President, as Hoffa’s cronies have tried to block the election.

Working Teamsters Deserve a Voice at the Convention 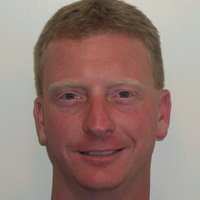 “At the last convention, most of Hoffa’s delegates voted the way he wanted, no questions asked.

Raising Your Dues Without a Vote

Hoffa promised in his campaign that he wouldn’t raise members’ dues. But in 2002—after he got re-elected—he called a special convention and rammed through a proposal to increase dues for all members. He banned cameras from the room and would not a allow hand vote. 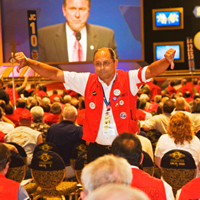 In 2006, independent delegates demanded the members’ right to vote on a dues increase. One of Hoffa’s running mates for International office, George Tedeschi, told the Convention “Having a referenda is no more than a waste of money, just like TDU is trying to make this union spend millions of dollars in an election [for International Officers].”

In 2006, Hoffa’s delegates voted to raise the meal allowance for IBT officials to $100 a day. This is on top of other allowances and expenses accounts. That’s a lot of Big Macs.

Winning Your Right to Vote

In 1991, old guard officials tried to block your Right to Vote on Contract Supplements. But they lost and members won that important right.

Hoffa’s allies also tried to eliminate the Right to Vote on Convention Delegates that same year. They lost that fight, too.