March 14, 2012: TDU celebrates the contributions of Teamster women to our union and to labor struggles for social and economic equality.

Local 213 Teamster Diana Kilmury was such a leader, and was elected the first woman International Vice President of the Teamsters Union in 1991.

In between, thousands of Teamster women have gotten involved with TDU to build a stronger union.

TDU celebrates the contributions of Teamster women to our union and to our movement. 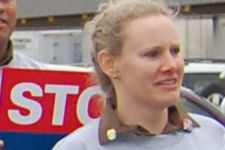 "It's tough being a woman with a truck driving job—not because of the work, but because it's out of the realm of normal roles women have in society. But being a single parent and having to support 2 kids I had to look for other options where I could earn a higher income.

"Women fought hard for the right to have these jobs. Thanks to them I can make a decent salary as a package car driver. I joined TDU to continue changing our union for the better." 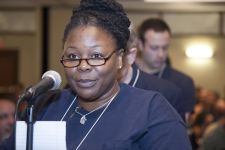 "The TDU Women's network brings together women Teamsters to share information and education, help us stand up for our rights on the job, and empowers us to get involved in rebuilding the union."

Diana Kilmury went from being the first woman heavy equipment operator in British Columbia Local 213, to the first woman International Vice President of the Teamsters Union.

Her story was made into an award-winning 1996 movie. Click here to order a copy!

Watch her story and find out how Diana helped build TDU in its early years, spoke up for members on the Teamster Convention floor, helped win the Right to Vote, and changed our union for the better.