At the Teamster Convention, International Vice President Rome Aloise, the architect of the Vairma slate, moved to drastically hike the salaries for top International Union officers.

It came up twice, and both times the move to restore bloated IBT salaries was stopped cold. 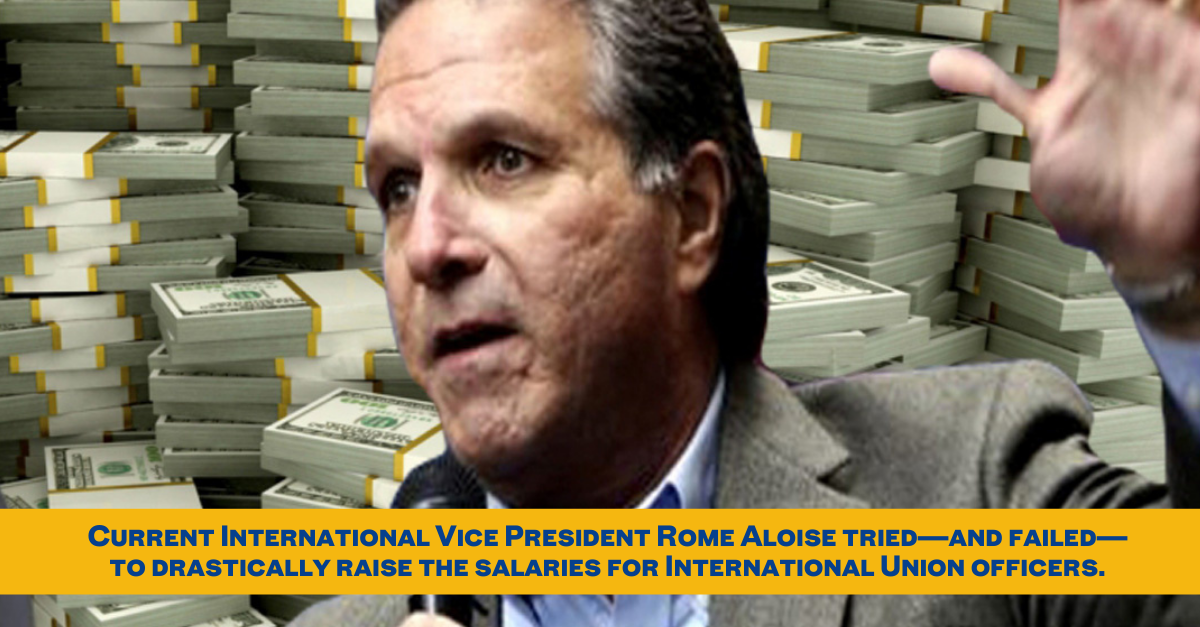 At a meeting of the Teamster Constitution Committee in June, Aloise suggested doubling the salary of the Teamster General President. His plan didn’t get through the committee, but the effort to increase International Union salaries came back again.

During the Convention itself, a motion was made at an emergency meeting of the Constitution Committee to raise the salary cap for International Union officers from $225,000 to $390,000.

This proposal got shot down by the Constitution Committee, so it never made it to the floor of the IBT Convention for a vote.

The reason? No Teamster leader wanted to openly back that motion, and then face the members in the IBT election this fall.

The History of Reform

Top Teamster officials once paid themselves salaries of nearly $2 million a year in today’s dollars.

TDU, the right to vote, and leaders who put members first have brought salaries in line with best practices in the labor movement.

A few years later, Ron Carey was elected General President in the first ever one-member-one-vote election. His first announcement was that he would cut his own salary to $150,000 in 1992 ($279,996 in today’s dollars). It signaled a new day in the Teamsters.

What Made This Change?

What made top Teamster officials stop paying themselves like CEOs?

1. Informed Members. TDU ended the information blackout by publishing the salaries of the highest paid officers. Many members were appalled by inflated salaries, and perks like the two private jets owned by the IBT.

2. The Right to Vote. In March 1989, TDU helped win the Right to Vote for all International officers, and we still have that right. When the election season opened in 1989, TDU issued leaflets revealing that International Vice president Arnie Weinmeister made $398,863 ($966,602 in today’s dollars) and General Secretary Treasurer Weldon Mathis made $284,195 ($688,716 in today’s dollars). Both of them then withdrew from running in the 1991 first-ever membership vote.

3. Constitutional Changes. The IBT Constitution was amended at the 1991 IBT Convention in Orlando. Under pressure by members and Ron Carey’s campaign, the dominant incumbent group agreed to support an amendment to limit the General President to $225,000, and that other IBT officers could not go higher. (A cost-of-living clause allowed General President Hoffa’s salary to rise to $328,972 after 22 years in office.)

Presser and other top Teamster officials of the 1980s compared themselves to corporate executives and argued they should have corporate salaries and corporate jets to use for golf outings and trips to resorts.

Today, CEOs of Teamster employers such as Coca Cola, Waste Management, UPS, or Kroger have bloated compensation of $11 million to $20 million a year, many times more than Teamster leaders.

Rome Aloise stated that some unions pay top leaders over $400,000 and urged that our union match their salaries.

He’s wrong. That’s not where Teamster power comes from—it comes from leaders with the guts and integrity to unite members to win.

We can all take pride in having a union constitution that pays leaders well and with top benefits but does not separate them into a class apart from the Teamsters who do the work and move the goods.

Learn more about how Teamsters members organized to rein in union officials' salaries.