Sysco Teamsters are using strikes and solidarity to fight for better contracts. More than 800 Sysco Teamsters in three states are celebrating contract victories after they lined up their expiring contracts and took coordinated strike action. 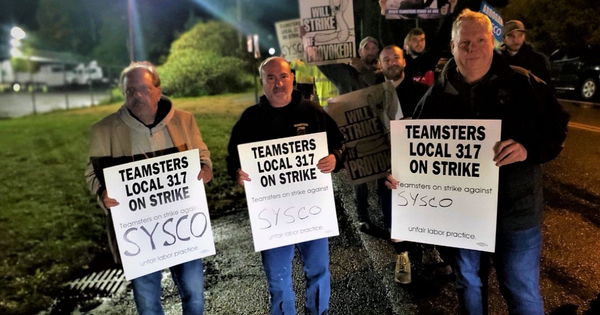 The contract wins show that new International Union strategies and member solidarity are paying off.

Sysco, a wholesale restaurant distributor, hauled in over $12 billion in gross profits for the 2022 fiscal year–a 31 percent gain.

But the company remains a harsh employer for more than 10,000 Teamsters nationwide and tens of thousands of nonunion drivers and warehouse workers.

These problems are uniting members to fight for better contracts and driving nonunion workers to organize with the Teamsters.

There's Power in a Union

In September and October more than 800 Sysco Teamsters struck facilities in Syracuse, Phoenix, and Brockton Mass.

The strike wave began in Syracuse Local 317 where Sysco demanded a two-tier wage system that would pay lower wages to new hires.

Management also demanded “flexible scheduling” provisions that would have threatened consecutive days off and protections against forced overtime.

Local 317 members went on strike and defeated the company’s concessionary demands. They won a new contract with $7 in wage increases over five years for drivers and $6/hour for warehouse workers.

During the fight, not a single member crossed the picket line. Support from Teamsters, other unions, and the public kept members energized and the strike line firm.

Less than a week after the Syracuse Sysco Teamsters went out on strike, 300 Sysco drivers in Brockton, Mass. began an Unfair Labor Practice strike.

The company’s offer in Brockton would have made members go back to the company health plan that workers organized with the Teamsters to get rid of.

Local 653 Teamsters were joined on the picket line by hundreds of members from other locals.

“Teamsters from different companies and locals across New England showed up for these drivers,” said Greg Kerwood, a Boston Local 25 Teamster and TDU Steering Committee member who joined the Sysco picket line in Brockton. ”The company took a hard line and so did we.”

One day after their strike began, Brockton Local 653 members extended the picket line to a 250-member Sysco facility in Phoenix, where members had been fighting for a new contract since July.

Local 104 members honored the picket line, shut down Sysco in Phoenix, and secured a new contract after months of stalled negotiations.

Two weeks later, Sysco Teamsters in Local 653 won a strike victory of their own. Their new contract includes $11 an hour in wage increases over five years, including an immediate $5/hour raise, maintained their Teamster healthcare plan, improved their retiree benefits and established MLK Day as a paid holiday.

As part of the settlement, Sysco Corporate agreed to drop all pending lawsuits and NLRB charges against the Teamsters.

Each Teamster Sysco contract is negotiated separately. But the International Union is making a push for more coordination and communication between Sysco units across local unions.

Syracuse, Boston, and Phoenix Sysco all had different expiration dates. When management stonewalled in negotiations, local unions coordinated so their contracts would be open at the same time. This strategy has let the Sysco Teamsters pack a significant punch by striking three major facilities at the same time.

Lessons for Other Teamsters

The strike wave at Sysco shows what Teamster solidarity is about.

Sysco Teamsters say there are important lessons for members in other industries from grocery warehousing to beverage to private sanitation.