Amazon is a growing threat to Teamsters at UPS, in warehouses, and across the logistics industry. How do we fight back and win? 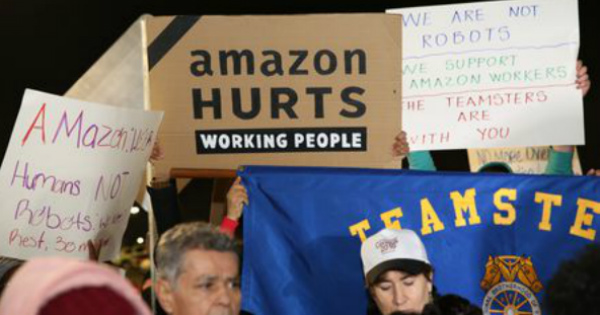 Amazon employs more than 500,000 workers in the U.S., the vast majority in 110 Fulfillment Centers and other warehouse and delivery facilities.

Working conditions in these warehouses are a nightmare. Amazon workers in some facilities are twice as likely to be injured as Teamsters in package delivery and warehouses.

Amazon controls over 50 percent of all online shopping orders. Now, it is working to crack the “last mile” problem: how to cost-effectively make final delivery to the customer without having to rely on UPS or the Post Office.

Amazon has opened 100 Delivery Stations and deployed a fleet of subcontractors and privately contracted drivers—think Uber, but for packages instead of people—to make deliveries.

The Teamsters and Amazon are on a collision course. Amazon has already transformed warehousing work and technology. Now, its goal is to directly compete with unionized package delivery workers—from the post office to UPS.

The next Teamster leadership has to make confronting Amazon a priority. The future of Teamster power and the U.S. labor movement depend on it.

Amazon workers are starting to step up. Some have organized walkouts, petitions, and rallies to spotlight abuses and win improvements. Their actions have been creative and courageous. But organizing Amazon will not be quick or easy.

The company is hostile to unions, and financially and politically powerful. CEO Jeff Bezos is the richest person in the world, worth over $116 billion.

The anti-labor environment makes it that much tougher. Unionization rates remain historically low and corporate politicians continue to push laws and regulations that promote ‘Right-to-Work’ and weaken union power.

Beating Amazon will be a long-haul effort. What are some steps we can take now to build power and win?

Build Alliances: The Teamsters is the dominant union in the logistics industry. We can invest resources to build a coalition of Amazon workers, community groups, immigrant rights organizations, solidarity groups, pro-labor politicians, and other unions.

Take Action Together: Unions and community groups are exposing violations and taking action together at Amazon targets, including the Distribution Centers at the heart of its logistics empire.

Build a Movement: Passing out cards and holding union elections won’t be enough. To win at Amazon, the labor movement will need to look more like a movement. The Fight for $15 is one example of how unions and allies can build a broad movement to fight and win.