Teachers Give Lessons on How to Strike and Win

Teachers across the country have launched a wave of strikes, walkouts, sickouts, and rallies that are winning gains, galvanizing members, and breathing new life into the strike. 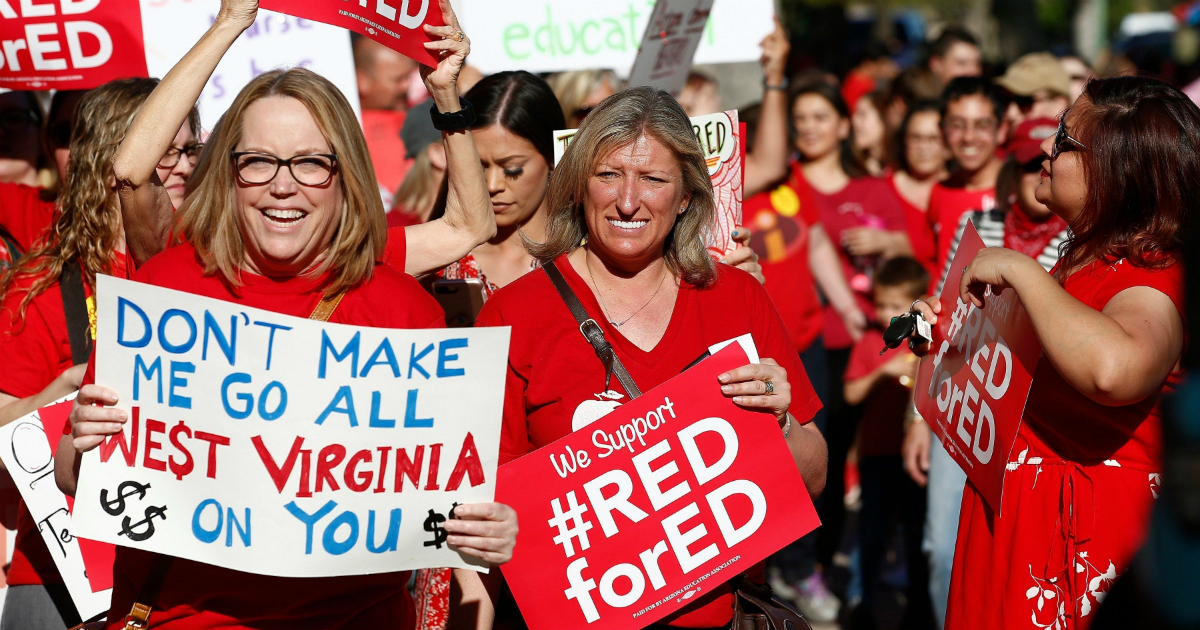 The strikes are fueled by rank-and-file anger, and many were coordinated not from above by the official union leadership, but by networks of activists or TDU-like movements.

The energy unleashed by the strikes, the size of the mobilizations, and the level of organization shown has caught many by surprise. The teachers have put the strike—labor's most powerful weapon—back in our playbook, and shown what can be done when workers unite, organize creatively, and take to the streets.

The Teachers Strike Back

West Virginia: In February, teachers in three West Virginia counties coordinated a walkout to protest proposed hikes in insurance premiums and to demand higher pay. Walkouts and rallies spread throughout the state, leading to a 14-day strike of 20,000 teachers on February 22. The unions' leaderships called off the strike after the Governor proposed a 2% pay increase for teachers. But the teachers decided to stay out for another week, and won a 5% pay increase for all West Virginia public workers.

Kentucky: On March 30, thousands of Kentucky teachers coordinated a sick-out in protest of a proposed overhaul to the state's pension system.

Oklahoma: On April 2nd, Oklahoma teachers launched a 9-day walkout. The teachers, who had not seen a raise in a decade, demanded $10,000 for teachers, $5,000 for support staff and $200 million in restored and added school funding.

Arizona: 20,000 Arizona teachers won a 20% pay raise after a six-day strike that culminated with a massive rally in Phoenix. The strike was organized by the rank-and-file-led #RedForEd movement and the Arizona Educators United, a group that was built to unite Arizona teachers across different unions.

Colorado: Teachers in Pueblo, Colorado concluded a 5-day strike on May 11. The teachers began their strike after the school board rejected a 2 percent cost of living increase. After the strike, the school board approved the increase.

North Carolina: Teachers across the state walked out on May 16, shutting down schools to demand higher pay, more funding per-student and more resources to improve schools. 15,000 marched on the state Capitol in Raleigh.

Lessons from the Teachers

The wave of teachers strikes stem from particular conditions facing public school teachers. But they have wiped away some of the stigma attached to strikes, shown they can be done, and demonstrated some valuable lessons on how they can be built by rank-and-file members.