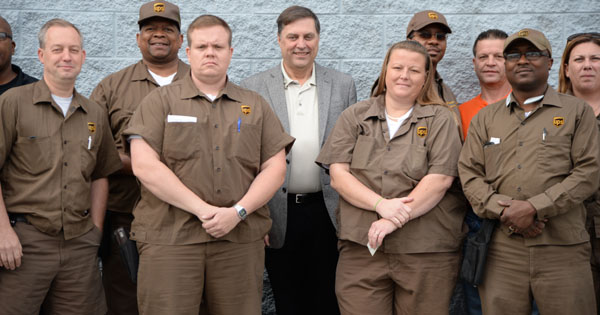 Fed up with weak contracts and escalating harassment, UPS Teamsters voted in favor of new International Union leadership by a wide margin. “The vote results tell you that UPSers are fed up and ready to fight,” said Fred Zuckerman. “That gives us leverage to beat givebacks and win a better contract at UPS, if we stay organized and fight together. That’s exactly what Teamsters United intends to do.”

them. UPS brass in Atlanta is worried too. In the past, the company has been able to rely on Hoffa and Hall to push through weak contracts, but those days are over.

In 2013, members organized a Vote No movement and rejected 18 contract supplements, covering 63 percent of UPSers.

The overwhelming vote by UPS Teamsters against Hoffa-Hall showed that member anger hasn’t gone anywhere. In fact, it’s spread. In 2013, the Vote No movement was largely confined to locals where Hoffa-Hall negotiated healthcare cuts. But in the 2016 election, UPSers voted for

Fred Zuckerman and Teamsters United in over 90 locals nationwide.

Hoffa-Hall carried a majority of the UPS vote in most of Northern California, Oregon and Washington and parts of New England. In the rest of the country, UPSers voted Teamsters United. “Drivers have had it with harassment, excessive loads, out-of-control discipline, and weak union leaders that let the company get away with it,” said Joan-Elaine Miller, a Philadelphia Local 623 package driver.

Part-timers and inside workers feel the same way. “Our wages are too low and the harassment is too damn high,” said Dave Loobie, a New York Local 804 part-timer and Teamsters United candidate for Trustee. “If local officers won’t stand up to UPS, members will run against them and vote them out.

“We built a national network of UPSers to turn out the vote for Fred. We’ve got to build on that going forward,” said Dave Bernt, a Chicago Local 705 feeder driver and Teamsters United candidate for Trustee.

“The company needs to see that UPSers are organizing and capable of taking united action. That’s how we’ll win a good contract,” Bernt said. Teamsters