Uniting for a Better UPS Contract

Teamsters United has launched a grassroots campaign to send UPS and the Hoffa-Hall administration a message that members won’t let them settle short and sell us out again. 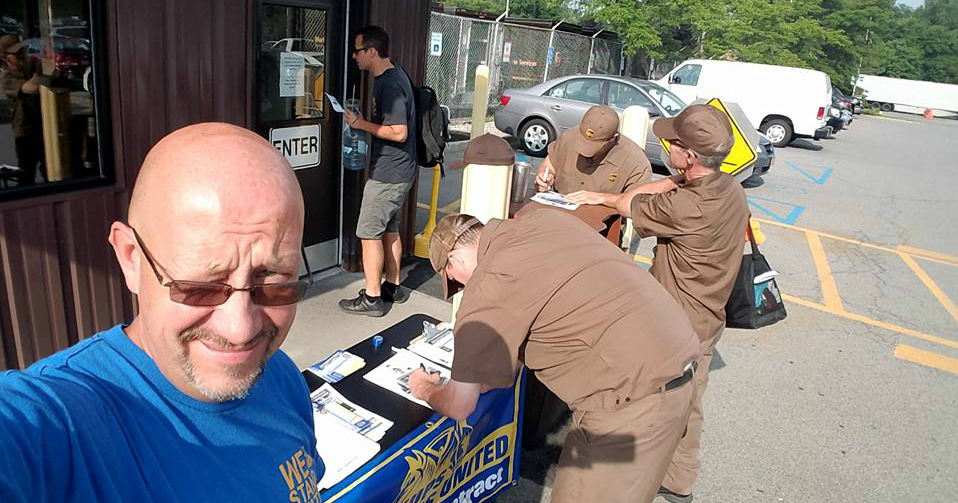 UPS Teamsters across the country have collected signatures on a Contract Unity Pledge that says, “I will stand with Teamster members at UPS to defeat harassment and contract givebacks and win the contract we deserve.”

UPS Teamsters remember how Hoffa and Ken Hall teamed up with the company to force through a weak contract last time.

“We’ve learned the hard way that we can’t trust the Hoffa-Hall administration to fight for us in contract negotiations, so we are fighting for ourselves” said Mark Ham, a steward from Iowa Local 238.

The Contract Unity Pledge is the first step in a Teamsters United campaign to organize UPSers nationwide.

Last time, many Teamsters voted to reject their supplements, but Hoffa and Hall imposed concessions anyway.

This time, management and the IBT need to see that UPSers are ready and organizing to vote down the national contract if necessary.

“UPSers are mad and we want change. We’re fed up with harassment and givebacks. The company has gotten its way the last couple of contracts. But it’s different this time. Members want change—and we’re going to stick together to fight for a better contract.”

We Can Stop Another Contract Sellout

“Management has been able to rely on Hoffa and Hall to sell weak contracts. But those days are over. Seventy percent of UPSers voted against Hoffa in the election. We have the numbers to reject the national contract if it’s another bad deal. This gives us leverage to defeat givebacks and win a better contract.”