UPSers voted heavily for Teamsters United and its platform of mobilizing members to reverse Hoffa-era givebacks and win a strong contract. 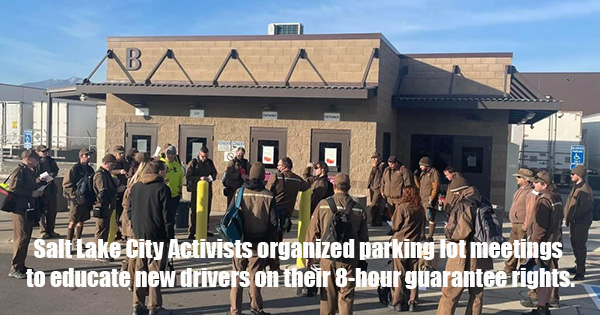 The UPS contract expires on July 31, 2023. Members are organizing now to build unity, take on problems, and stand up to UPS management.

In many areas, drivers are being forced to work six days a week.

In the lead-up to peak season, management was regularly forcing drivers at the Salt Lake City hub in for a sixth day, but only assigning a few hours of work. Stewards and activists organized parking lot meetings at two buildings to educate new drivers on their 8-hour guarantee rights. When drivers use their 8- hour guarantee, it makes it much harder for management to abuse forced 6th day overtime by calling everyone in.

“The meeting got 22.4s and lower seniority drivers talking more to each other and to their stewards after that,” says Matt Solis, a 3-year driver who participated in the meeting.

“We’re seeing a lot more activism and engagement between members and stewards. It’s not like we stopped sixth punches altogether. But we showed that we can fight back together.”

In some locals with strong union backing, drivers have been just saying no to Saturday work altogether and shrugging off the warning letter they receive for refusing to come in.

In Columbus, Local 413, the company cracked down by escalating discipline and putting drivers on working terminations. Drivers responded by abruptly and collectively complying. One Saturday, 25 RPCDs showed up as ordered instead of the usual half dozen. Beforehand they met up with the 22.4s for donuts in the parking lot.

“They were all super pumped to see us,” shop steward Nick Perry said. “They realized, ‘Oh wow, these guys have our back.’”

“This supervisor was freaking out, not knowing what to do. He’s on the phone with our boss—he’s like, ‘Yeah, there’s a lot of them.’”

The upshot was that the regular drivers got their guaranteed eight hours—and an uncharacteristically relaxed workday, and 22.4s got to slip out early on a Saturday for once.

Standing Up To Harassment

When management ignores harassment grievances, members can take action to get results.

Management caved the next day. They met with union representatives, and the harassing supervisor was demoted.

“As a steward or activist it’s easy to see when a problem is impacting everyone. When we get drivers together from our center, they see they’re not alone. We held parking lot meetings to get everyone filing on 9.5, and management created more routes,” says Washington.

“Parking lot meetings are also a flex to show management they can’t separate us from the pack.”

Regular Package Car Drivers have a number of 8-hour requests per month guaranteed, depending on the supplement.

In Chicago Local 705, stewards and activists are organizing to make sure all drivers know about that language and use it.

“Forced overtime is a pandemic at UPS. Our local contract gives every driver two 8-hour requests per month, but the company tries to keep new drivers in the dark about their rights,” says Dan Ginsberg, steward at the Jeff Street hub in Chicago.

“We talk to every new driver to make sure they know how to use their 8-hour requests and to file a grievance right away if an approved request isn’t honored. If you don’t know the protections you are either losing an opportunity to get off or leaving money on the table.”

In addition to regular in-person check-ins, Ginsberg sends group text reminders on the 15th of every month to remind drivers to use their monthly 8-hour requests if they haven’t yet.

Message groups like WhatsApp let you share information with other members in your building.
In Washington, D.C. Local 639, Pre-load Steward Carthy Boston started a WhatsApp group last year to connect all of the inside workers in her center.

They use the group to share information on building issues, grievance updates, schedule changes, and upcoming meetings.

“Building up our chat group was a good way to have one-on-one conversations with our co-workers to invite them to join,” says Carthy. “It’s not just the information, it’s also building unity that we can take to the shop floor.”

Over the past year, New York Local 804 part-timers used the “40-in-70” rule in their supplemental contract to win more than 100 new full-time inside jobs.

When part-timers work a shift of 8 or more hours 40 times in a 70-day period (excluding peak), they can document their hours and make the case there is a need for a permanent full-time job.

While the specifics of this language differ by supplement (most areas have a “30 in 90” rule under “Acquisition of Seniority”) there is similar language in most supplements that part-timers can use to win more full-time jobs.

“Keep your own record of your work hours. If you think you’ve hit 30 in 90, or 40 in 70, talk to your shop steward or business agent. They can request the staffing record,” says Paul Trujillo, a Pre-load steward in Virginia Local 822.

“As soon as you have that, you’ll have the company record and your personal records and you can file the grievance,” Trujillo said.

Enforcing the contract on supervisors working can be a way to win more fulltime and preferred inside jobs.

In North Carolina Local 391, Twilight steward Chris Cecil noticed supervisors regularly doing clerk work at his center. He brought it up multiple times with hub supervision, and management promised to fill the positions before 2021 peak.

When the jobs hadn’t gone up to bid when peak started, Cecil filed $5,000 worth of supervisor working grievances over the course of a month.

By the end of December, there were three new preferred jobs up for bid.

“If you see supervisors working regularly in an area, particularly in a preferred work area, take notes and start filing every time,” says Cecil. “Preferred
jobs have better hours and overtime, and can be a bridge to forcing the company to create more 22.3 full-time inside jobs.”

In many areas UPS is using Market Rate Adjustments (MRAs) to arbitrarily change wages for hiring and retention.

This policy lets UPS raise the wages of some workers without implementing wage increases across the board. Unlike contractual raises, Market Rate Adjustments can be temporary.

At UPS World Port in Louisville Local 89, members organized a petition to protest management cutting wages for thousands of workers by letting an MRA expire, and demanded that increases be implemented for all workers.

“Management can afford to pay us all more,” says Local 89 World Port steward David Frantz, who organized the petition. “We collected thousands of petition signatures from across the local and delivered them to management to show we’re united.”

“If they cut the MRAs and we end up with a staffing shortage, we’re prepared to file on supervisors working, win penalty pay, and demand management staff the operation.”
The long-term solution is bargaining for stronger wages in the next contract.

“Our contract should have high enough wages that we don’t need to rely on MRAs for a living wage. We’re taking action to get ready to fight for the contract we deserve,” says Frantz.