Vote No Strikes Back 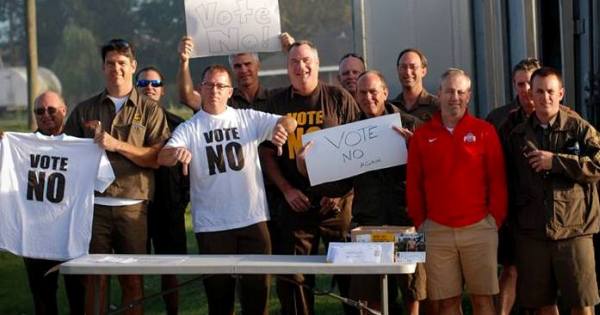 TDU and Teamsters United organized Vote No resistance into a movement for new leadership and a new direction. Members from these locals voted 19,609 to 8,065 for Teamsters United—with higher voter turnout in most cases.

This is something to build on in future elections and contract fights. Organizing works!The Vote No movement took strongest root where Hoffa-Hall agreed to healthcare cuts by moving members into TeamCare or a new health plan in the Southwest and in New Jersey.

In every region, the UPS Teamsters who fought contract givebacks turned out against Hoffa-Hall—by large margins and, often, in higher-than-average turnout.

The strongest Vote No locals in 2013 were in New Jersey, New York and Pennsylvania.

The strongest Vote No movements in the Central Region took root where members were being moved into TeamCare, with lesser benefits.

In Southern California and the Southwest, Hoffa’s Western UPS officials Randy Cammack, Andy Marshall and Ron Herrera tried to put lipstick on the pig of their healthcare cuts by “carving out” their locals from TeamCare to create a new health and welfare fund. New Jersey Local 177 joined it as well. Members still voted for Teamsters United.