Workers are Fighting Back and Winning

Last Spring, teachers in six states launched a new strike wave. Now, their example is being taken up by more workers who are uniting, fighting back, and winning. 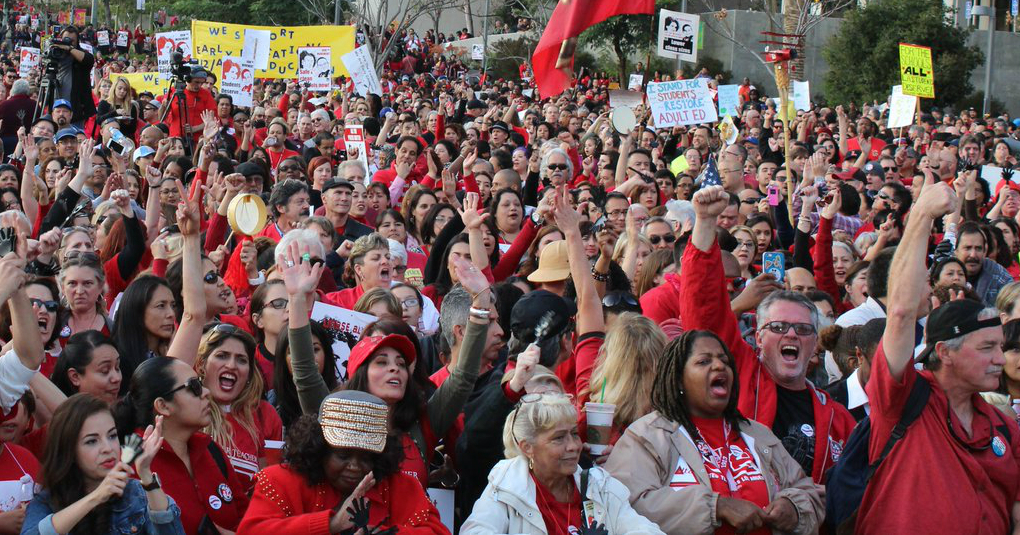 In November, hotel workers in six cities hit the picket lines from Boston to Hawaii—their biggest strike ever. Chicago Teachers just won the first-ever strike at 15 charter schools. And in December, 50,000 teachers and their allies marched through downtown L.A. as the 33,000-member United Teachers of Los Angeles prepares to strike.

‘One Job Should be Enough’

The Marriott hotel chain is the largest in the world.

But stagnant pay and lack of job security mean many hotel workers are priced-out of living in the cities they work in, must work multiple jobs, and have to fend for themselves for healthcare.

Starting in Boston, 500 workers went on strike under the slogan “One Job Should be Enough”. The strike quickly spread, with Marriott workers walking out in San Francisco, San Diego, San Jose, Oakland, and Detroit.

The strike of 7,700 workers forced many hotels to shutter bars and restaurants and cut-back on amenities. UNITE-HERE launched a website—www.marriotttravelalert.org—and a public outreach campaign to win public support and encourage boycotts of Marriott-owned hotels. Large groups, including unions, began pulling their events and cancelling room reservations.

The unprecedented strikes in 8 cities all won—with members approving new agreements that include wage and benefit increases and various important job protections.

Earlier, in Chicago, 6,000 workers at 26 Hyatt and Hilton hotels struck and won their major demand—year-round, guaranteed health insurance. (Seasonal layoffs or reduced hours mean many workers are forced to scramble for healthcare when it's not tourist season.)

Chicago Teachers hit the streets again—but this time it was teachers who work at for-profit charter schools.

The charter school movement is a direct attack on public education and teachers unions, and part of the corporate agenda to  privatize education and turn schools into businesses.

The Chicago Teachers Union launched a historic strike in 2012, after the union came under the new leadership of the Caucus of Rank-and-File Educators, a reform movement modeled on and inspired by TDU. Many credit the 2012 CTU strike with sparking the fight back spirit that led to the wave of teachers' strikes last spring.

In early 2018, 550 teachers and paraprofessionals who work at 15 charter schools run by the Acero corporation—along with many other charter school workers represented by the Chicago Alliance of Teachers and Staff—affiliated with the CTU.

Top on their list of demands for their new contract were pay raises, reduced class sizes, and a shorter school day.

They won—including raises which will bring them up to parity with Chicago public school teachers—but only after they became the first ever charter school teachers to strike.

There's likely more to come too. Organizers have adopted an industry-wide approach and have lined up contract expiration dates for 33 charter schools in Chicago.

It’s been 30 years since Los Angeles teachers went on strike.

The Los Angeles Unified School District has a record $1.9 billion in reserves. The United Teachers of Los Angeles—and their supporters—are demanding the District give students and educators the resources they need and deserve, or else face a strike with broad community support.