"Everyone Can Do Something" - Interview on Organizing with Dave Bernt

Dave Bernt is a member of the Chicago Teamsters United Committee. Teamster Voice spoke with him about how they’ve been so successful and tips he has for other members. 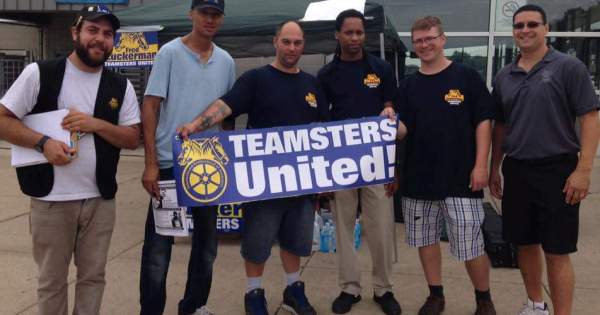 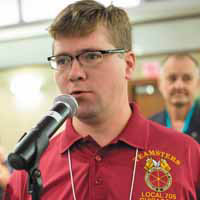 What kinds of activities has the Chicago Teamsters United Committee been up to?

We do regular, weekly campaigning at shops throughout the Chicago area. We always do it in teams, of anywhere from 2 to 15 people for the bigger shops.

We polled our core people and found that Mondays are good days—people who work second or third shift or have Mondays off or can take a day then. So now, everyone knows that Mondays are campaigning days and can join us at the targets that week.

We also have monthly meetings for our core volunteers. We’ll give a brief report of the national campaign, report on our activities since the last meeting and go over plans for the coming month. We regularly draw about 20 members to our monthly meetings.

We use the monthly meetings to do trainings. This is important—it’s not just a talk shop, but a workshop to prepare people for getting out in the field. We train people on how to do gating, what to expect when you’re out there, how to build a rap, how to identify supporters versus cranks and who we want to reach.

Members have more confidence if they feel they’re following a playbook that is tried and tested, rather than just winging it on their own. Our main goal is to make sure their experience is productive—if new members get out there and have a bad experience, don’t reach many people, they can get discouraged. But if we put them in a position where they can be successful, they’re going to stick at it and be around for the long haul.

We have one quiet supporter, who just started by passing out leaflets. But after he’d come out with us a few times and watched how others reached out, he built up his own rap and got good at engaging people. He’s still quiet, but the difference now is he found a method comfortable for him and is an excellent campaigner.

How have you been so successful in getting members involved?

The campaign is naturally attracting more people. And when people saw us out at the gates, or our Facebook posts with pictures of us at different facilities, they saw we aren’t just talkers, but we’re do-ers. People are attracted to an ongoing operation that’s doing something.

And you have to be flexible and have different roles for different members. Some can—and do—go out with us every Monday, others can’t get time off or have family commitments. That’s ok, we find other ways to plug them in. Sell
raffle tickets, attend an event, get leaflets out at your shop.

The campaign gives the opportunity for everybody to do something concrete. One guy was frustrated he couldn’t make it out with us or come to events. “Can you talk to your co-workers, spread the word at your shop?”

You’re in Chicago. What advice do you have for Teamsters in smaller areas?

Everybody can get involved somehow. It’s just a matter of finding out what makes the most sense in your area.

It might not make sense to have regular meetings—but can you contact the campaign and set up a conference call with members in your region?

Start by picking one day when you and maybe just one other member (but as many as possible) can take a day off to do campaigning together.

Adjust it to whatever resources you have. The key thing is to do some ongoing organizing activity at some level.

Has TDU helped you become more effective? How?

There is a strong Teamsters United campaign in Chicago because there is strong tradition of TDU here. TDU is like the living memory of the do’s and don’ts of Teamster politics.

There’s a wealth of knowledge and experience in TDU that I lean on for advice on how to organize, what works and what doesn’t. I’ve only been around for the last 2 elections, but I meet and learn from people like Craig Karnia, who was active in Ron Carey’s campaigns. We don’t have to reinvent the wheel every election. Some things change of course, but a lot—the methods, how to successfully reach out to members—stay the same.

TDU gives us the tools we need—all we need is to get out there.

What do you have planned next?

The key focus now is continuing to campaign and sign up supporters, non-stop. We decided not to go for another big event now, but to do targeted fundraising instead. At our next meeting, we going to set individual fundraising goals and make commitments we can be held to. We’re going to be realistic, but you can bet that we’ll hold each other accountable too.