In October, Teamsters in the Brotherhood of Maintenance of Way Employees Division (BMWED), who build and maintain tracks and bridges, voted down a national tentative agreement with the freight rail carriers. 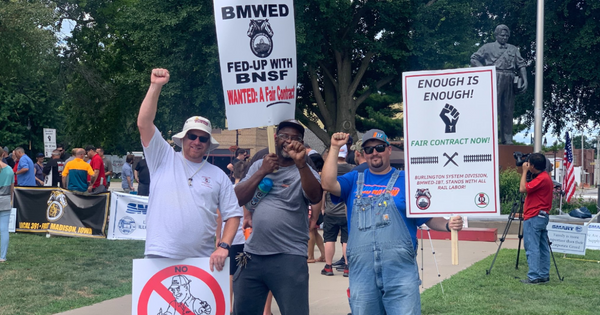 In a statement following the vote, BMWED President Tony Cardwell said that “management holds no regard for their quality of life, illustrated by their stubborn reluctance to provide a higher quantity of paid time off, especially for sickness.”

Railroad workers currently get no paid sick days. The BMWED, part of a bargaining coalition with the Sheet Metal Workers’ Mechanical Division, had pushed for 13 sick days annually, but the carriers refused to budge.

Leaders are set to return to the bargaining table. Any potential strike is delayed until November 19 at the earliest.

BMWE Rank and File United, a caucus in the union, released a statement encouraging members to organize and push for a stronger agreement.

“We must stand together in showing the carriers, politicians, and the world that we are not done. Our union leadership only has power at the bargaining table if we give it to them,” the statement said.

The rejection marks a turnaround.

Of the dozen unions that are part of the negotiations, four (the railroad electricians (IBEW), the train dispatchers (ATDA), the Transportation Communications Union representing clerical workers, and the Brotherhood of Railway Carmen representing workers who inspect and maintain train cars, affiliated to the Machinists) ratified agreements in September or October.

Members of Machinists District Lodge 19 voted in September to reject their deal. The union has since announced a new tentative agreement.

BLET and SMART-TD members were mailed ballots on October 14. Together these two unions, which represent conductors and engineers, make up half of the 115,000 union members at the Class I freight railroads.

Could the news out of the BMWED impact these votes?

Jack, a SMART-TD member out of Illinois who asked not to use his last name, thinks that “seeing another union take a stand will show everyone it’s possible to fight back.” But he says members are still nervous about Congressional intervention leading to a worse deal.

The “no” vote partly reflects pent-up anger over the increasingly grueling conditions on the job. As the rail employers have embraced Precision Scheduled Railroading, they’ve slashed the workforce, increasing the workload and hours of the workers who remain.

According to the Surface Transportation Board, the freight railroads have shed more than 20 percent of their maintenance-of-way jobs in the past six years, and more than 50,000 rail jobs in total since the year 2000.

“I’m not surprised,” said Deven Mantz of BMWED Lodge 1326 in Minot, North Dakota, when he learned the contract had been voted down. “People are pissed off, and they want somewhere to direct it. If we’re not careful, they’re going to direct it at our union. So our union leadership needs to step up and direct that anger at the carriers, who caused it.”

The two major issues addressed in the September 15 deal brokered by the White House between the railroads and the BLET and SMART-TD were health care costs and time off for medical appointments.

Press reports made it sound like the deal would create three sick days for railroad workers. But once the actual language came out, what was created turned out to be something less than sick time: merely unpaid time off for routine or preventative medical appointments, on a Tuesday, Wednesday, or Thursday with at least 30 days notice, plus no attendance penalties for hospitalization or surgery.

The two unions held a 15-day “question and answer” period before sending the tentative agreement for a contract vote. Many members were immediately upset with the terms; Ross Grooters, a BLET member in Iowa and activist with the rank-and-file group Railroad Workers United, tweeted, “I don’t need questions answered. I need for all of us to VOTE NO!”

The BMWED was not subject to these agreements, since the union had already reached its own tentative agreement with the carriers on September 10. But members were following them closely as they waited to vote on their own deal.

Voting by mail started September 20. The union held multiple Zoom calls across different carriers to answer questions, and put together a Q&A document addressing wages, bonuses, and time off.

The BMWED’s tentative agreement largely tracked with recommendations made by a Presidential Emergency Board in August, including 22 percent wage increases over the life of the agreement (extending retroactively to 2020 and running through December 31, 2024), and adding one additional paid day off per year—but no sick time.

The deal included an annual $1,000 bonus for each of the five years, and capped workers’ monthly health care premium payments to $398.97 per month.

Another major issue in negotiations was travel allowances and away-from-home expenses. A large proportion of BMWED members travel for work; beyond offsetting travel costs, these allowances are an important source of income.

The national deal set basic standards, but left specific details to be worked out carrier by carrier. Those side agreements weren’t all available at the start of voting, which may have contributed to the no vote. Some members felt they were voting “blind,” though by the end of the ratification period each carrier’s side deal had been released to the membership.

Rail workers, including BMWED members, organized grassroots informational pickets in September at freight terminals across the country the week after the first strike deadline came and went.

In Chicago, St. Louis, Kansas, North Dakota, Idaho, Oregon, and West Virginia, workers stood with handmade signs that read “We Demand More” and “We Are Not Done Yet.” It looks like they were right.