Mike Walden is the President of the National United Committee to Protect Pensions (NUCPP). He is a retired Roadway Express Teamster from Akron Local 24. The NUCPP is an organization of pension action committees spread throughout the Midwest, South and beyond. 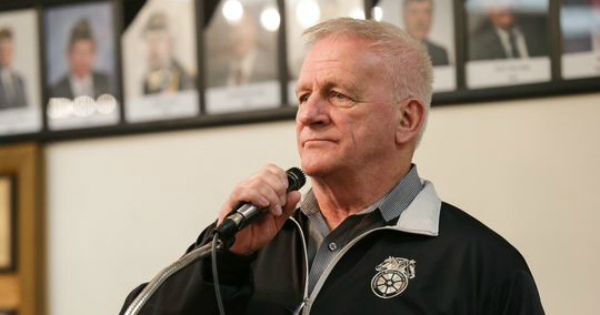 As a result of the organizing efforts of the NUCPP and their allies, the Butch Lewis Act was introduced by Senator Sherrod Brown (D-OH) and House Representative Richard Neal (D-MA) in 2017. Butch Lewis was a dedicated Teamster pension leader in retirement, former Holland driver, past President of Cincinnati Local 100, and a member of TDU, who passed in 2015.

The Butch Lewis Act did not come to a vote in Congress, but in March of 2018, Senator Brown was able to get agreement from the Republican Congressional majority leadership to form a Joint Select Committee that was charged with conducting hearings over the course of 2018 with the goal of presenting a legislative solution to the pension crisis no later than November 30, 2018.

We spoke with Mike Walden on this and other developments.

What does the NUCPP want retired and active Teamsters to do when it comes to the Joint Select Committee?

Mike Walden: We’re asking folks to write letters to the Joint Select Committee (JSC) telling how cuts would affect their lives. Central States has set up a website with a link that helps folks to contact Congress. That site and local pension protection committees can help folks with their letters or emails. They need to focus on stories about their working lives and what they’ve already sacrificed. The JSC plans to have these letters read into the Congressional Record on a daily basis.

Will there be meetings or hearings for concerned Teamsters to attend?

MW: Yes, there will be hearings in Washington D.C. – including with employer representatives. There are also plans in the works for the JSC to hold a meeting in Ohio. Retired and active Teamsters, and their spouses, are encouraged to attend. You can contact the NUCPP for details.

It looks like no solution or legislation will come until after the November elections. What plans does the NUCPP have for the coming fall or what can be done regarding the Congressional elections?

MW: Work with your local NUCPP committee to make a plan. Visit your local Congressional offices this summer individually, or better yet, as part of a committee. Go to candidate town hall meetings. Let the candidate know how important the pension issue is for their district. The Central States Pension Fund has launched a new website where you can find a link for the economic impact numbers for each Congressional district. Download and print that info and make those numbers known at candidate forums or with your local media. Get candidates to take a stand on support for the Butch Lewis Act—don’t accept, “I’ll look into it”—get a commitment. And then be sure to vote in November. This election will have a big impact for what we can accomplish on getting a new law that will protect our pensions.

You’ve been leading on fighting pension cuts for nearly four years. What do you make of our prospects for preserving our pensions?

MW: We’ve beat back the cuts so far because we got organized and became our own experts on the issues. It’s been very inspiring to be working with thousands of retired and active Teamsters who have banded together to defend what we earned and what we were promised. We must remain united and on message. We have to keep organizing and growing to win what is rightfully ours. We need a solution that is fair for all stakeholders.

Is there any plan for holding another NUCPP national meeting any time soon?

MW: Yes, we’ve discussed holding a meeting. The problem is deciding on a date when the JSC schedule and so much more is up in the air. But our goal is to hold a national meeting. We’re also considering organizing another rally in Washington or possibly in a local area. Our April 2016 rally made a big difference in getting the Central States proposed cuts rejected by the U.S. Treasury.

MW: Thanks to TDU and all the allies we’ve had in this fight, from the Pension Rights Center to the IBT and some local officers, to representatives from other unions. The NUCPP is constantly in Washington—and in local areas—working to defend our pensions. We still have much to do but there is light at the end of the tunnel.

What You Can Do to Protect Pensions

1. Contact your local area pension action committee. Find out how to get more involved. Learn more about local plans to press Congress to resolve the crisis.

2. Reach out to your Teamster Local. The 2016 IBT convention passed a resolution, unanimously, in support of defending our pensions. Ask your local officers how they plan to help win pension legislation.

3. Write a letter to the Joint Select Committee. Contact the NUCPP or Central States to get good advice on letters or
emails.

4. Visit www.tdu.org/pension_cuts to keep up to date on what’s happening.