How Members Saved Their Local

A huge contract victory shows what union reform and rank-and-file organizing can achieve. 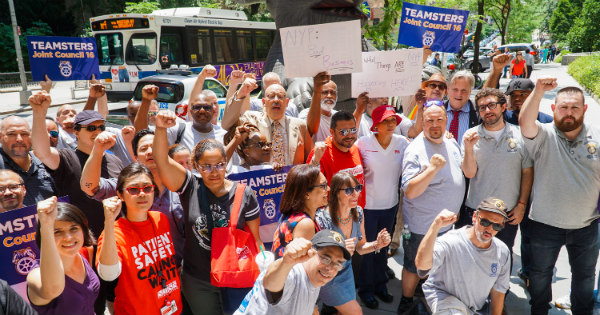 Ten years ago, commercial movers in New York City were proud Teamsters in a dysfunctional union.

When officers announced that the health fund was going bankrupt, members’ disgust reached an all-time high.

“The biggest win was guaranteeing that the employers continue to pay 100% of the medical premium and keep us in the best platinum-level medical plan,” explains Local 814 President Jason Ide. “As medical costs increase, bosses want to dump the costs on workers,” says Ide. “We took a hard line and said ‘No, you’re paying the entire cost of the plan.’ We passed out buttons that said
“Hands Off Our Healthcare” and took a 100% strike vote. Then they caved.”

“What a victory and what a turnaround,” says Local 814 Organizer and TDU Steering Committee member Julian Tysh.

It’s a turnaround years in the making. It never would have happened if members hadn’t organized and elected reform leaders. How did Local 814 members do it?

With their union and benefit funds on the verge of collapse, Teamster movers and art handlers joined forces to form 814 New Directions in 2009. They ran for office on a platform of saving the pension and benefits fund; making employers pay benefit contributions for all movers; and reducing the pay gap between tiers—and they won with 72% of the vote.

The first step was opening the union to the members. “We put the union in the hands of the members, so they could realize their own strength,” says Tysh.

Working movers were brought on the contract bargaining committee. A steward’s network and communication structure were developed. Hundreds of members turned out to contract meetings to discuss proposals and vote to authorize strikes.

“Our power grew when members got informed and saw others getting involved and united behind the same goals,” says Tysh.

In the past, Local 814 officials bargained behind closed doors and then used the threat of an unprepared strike to bully the membership into accepting givebacks.

The new Local 814 leaders threw that strategy out the door.

“We’re going to mobilize the membership and fight to win gains,” said new Local 814 President Jason Ide at the time. “With the state of our contract and our benefits, we’ve really got no other choice.”

Local 814 organized a mass meeting of movers to review what was at stake in negotiations and vote to authorize a strike. “The vote was overwhelming, something like 250 to 1,” recalls Tysh. Members were organized into strike teams to picket jobs throughout the city and were ready for the call.

When the companies initially refused to provide pension contributions for casual movers, the union bargaining team packed up and left the conference room. The companies realized they faced a well organized citywide strike, and had overplayed their hand. They gave in, and Local 814 won the increased contributions members demanded, the first step in rebuilding the pension fund. That
contract also began to close the wage tiers between veteran movers and new hires—setting the stage for the new contract that raises lower-tier pay by 27%, and won $10/hr increases for Friday-Saturday-Sunday work.

Taking on the Non-Union Competition

Commercial moving work is project-based—work can come and go based on fluctuations in the construction industry. Nonunion competitors are always trying to take Teamster work. Protecting union jobs means mounting picket lines and targeting companies—sometimes Fortune 500 firms—who try to save a buck by using nonunion labor to do their moving and furniture delivery work.

The union has trained-up a network of stewards and members on handbilling, public outreach, and picketing rules and tactics.

“We made rallies and handbilling a regular thing,” says Tysh. “And when we put up Scabby the Rat, building managers start to think twice about risking a shut down. Bringing the members out and rallying with Rat has put 814 back on the map in New York City.”

That training and member involvement is the difference between beating back the non-union competition and getting work for Teamsters, or letting members sit home for a week.