July 28, 2011: In early June, 5,000 United Airline mechanics voted down their proposed tentative agreement. Now they are looking at how to get a bigger voice in our Teamsters Union.

Whether they voted Yes or No on the contract, airline Teamsters want our union to be a powerful force for workers in their industry.

They want the right to elect their negotiating team. They want real communication between the leadership and the rank and file. They want an airline division with the staff and the vision to back them up in bargaining, and to mobilize members to win a good contract.

Greg Sullivan, a United mechanic in San Francisco and a Local 986 chief steward, said, “Sandy Pope has the vision, the smarts and the program we need. She’s not afraid to involve the members in decisions and in mobilizing for a good contract.”

Sandy Pope is reaching out to airline Teamsters in various crafts and at various carriers. 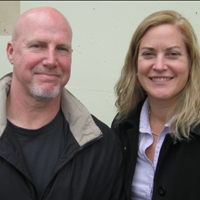 “Sandy Pope has the vision, the smarts and the program we need. She’s not afraid to involve the members in decisions and in mobilizing for a good contract.”