But under the tentative agreement, 140,000 UPSers would be moved into an inferior plan that will force them to pay a lot more for healthcare.

Just a few months ago, Teamsters turned out across the country in huge numbers to attend rallies and chant, "No way, we won't pay!"

Now healthcare concessions has gone from uniting Teamsters against UPS to uniting many members against the contract.

Opposition to the healthcare givebacks has run especially high in locals where both full-timers and part-timers would be moved into the Central States TEAMcare plan.

Members opposed to the cuts have passed out bulletins and FAQs put out by Make UPS Deliver at UPS and at contract meetings. 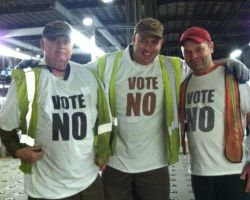 In Philadelphia Local 623, members printed up their own Vote No T-shirts and have flooded the air hub there.

"It feels good to walk around the second largest air hub in the U.S. and see nothing but Vote No T-shirts," said Local 623 member Bobby Curry.

A "Vote No on UPS Contract" Facebook page has connected 2,000 followers who are getting active around the healthcare concessions.

Some Western locals and New Jersey Local 177 got an extension to Nov. 1 to find an alternative plan. But they get the same reduced money from UPS to pay for coverage, which is less than members' current plan costs.

Any alternative to TEAMcare would only have to match the benefits in Central States TEAMcare, not the current plan.

UPS is making $5 billion a year and Teamsters were promised no concessions.

Why did the International Union agree to healthcare cuts?

"It seems ridiculous that a company earning record profits can't maintain what we already have," said Roger Austin from Local 215 in Evansville, Ind. "They seem to have forgotten they negotiate for us, not themselves."