An Information Brownout by the Hoffa administration is keeping UPSers in the dark. TDU and Teamsters United are informing and uniting members to defeat givebacks and win a fair contract. You can help. 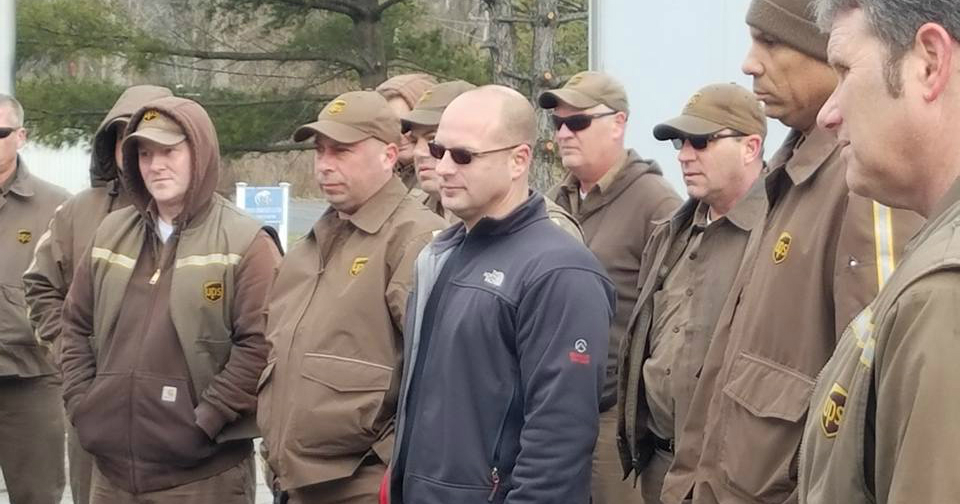 The Hoffa administration promised UPSers there would be no Brownout during contract negotiations. But old habits die hard.

“The IBT won’t even tell UPSers what we’re fighting for, let alone mobilize the members to win our demands,” said Fred Zuckerman. “That’s a recipe for givebacks and a weak contract. We can’t let that happen.”

Rank and file Teamsters have joined the UPS Teamsters United campaign, a grassroots effort to do what our union should be doing—informing and uniting members to win a fair contract.

UPSers are sending the company the message that they won’t settle short—they’re preparing members to Vote No and send our negotiators back to the table if that’s what it takes to win a fair contract.

Here’s how you can be a part of the fight for a fair contract.

Sharing contract information with other members is the first step.

“We held a meeting to talk about contract proposals and what we can do to win a good contract this time,” said Maurice Jarrett of Charlotte Local 71. “I realized if we want to stop givebacks, it’s up to the members to step up. Now when my coworkers pass out flyers in the parking lot, I get out there and help.”

“A lot of people just want to go to work, do their job, and go home. But they also want to know what’s going on. Whenever a new contract bulletin comes out, we pass it out in the parking lot,” said Natalie Batista, a daylight-shift member in New Stanton Local 30.

“We bring clipboards and sign members up to get contract updates straight from Teamsters United. The more people get the facts, the more we’re united and all on the same page,” Batista said. “When I get a text or an email I always forward it to other UPSers I have in my phone,” Batista said.

“When the locals in New England held parking lot rallies back in April, we decided it was time to step up. We held a rally to show solidarity at the Albany hub. It went great and we’ve been holding parking lot meetings ever since,” said Shannon Groff, a package driver. “Organizing our members is a top priority. We use the parking lot meetings to make sure everyone is signed up to get contract information from Teamsters United,” said Groff. “When UPS makes its contract offer, we want to be able to reach everyone and turn out the vote.”

Chicago Local 705 volunteers have been traveling to hubs and talking with UPSers across the Midwest. By taking advantage of feeder schedules and Tuesday-Saturday package delivery, they’ve been able to hit Indianapolis, St. Louis, Grand Rapids, and Milwaukee.

They have collected hundreds of names, phone numbers, and email addresses so they continue getting updates—even when out-of-towners can’t make the trip.

“When members ask, ‘will you be back next time there’s an update,’ we tell them the truth: we’re from Chicago and we may not make it back soon,” package driver Ben Cline said. “We sign them up to get the information directly from UPS Teamsters United—and ask them to help spread the word themselves.”

Teamsters United have organized national, regional and local conference calls to update members about negotiations and talk about what members can do to prevent givebacks.

“We held a conference call for UPSers in Central PA / Metro Philadelphia. Members came away with information they weren’t getting from the IBT and we made plans to inform and unite members and prevent givebacks.” Bob MacConnell, local 676 feeder driver.