How to Get Members to Take Union Action

Teamsters Local 89 Organizer Bryan Trafford gives tips on getting members to take union action—whether they are already Teamsters or unorganized workers trying to join our union. 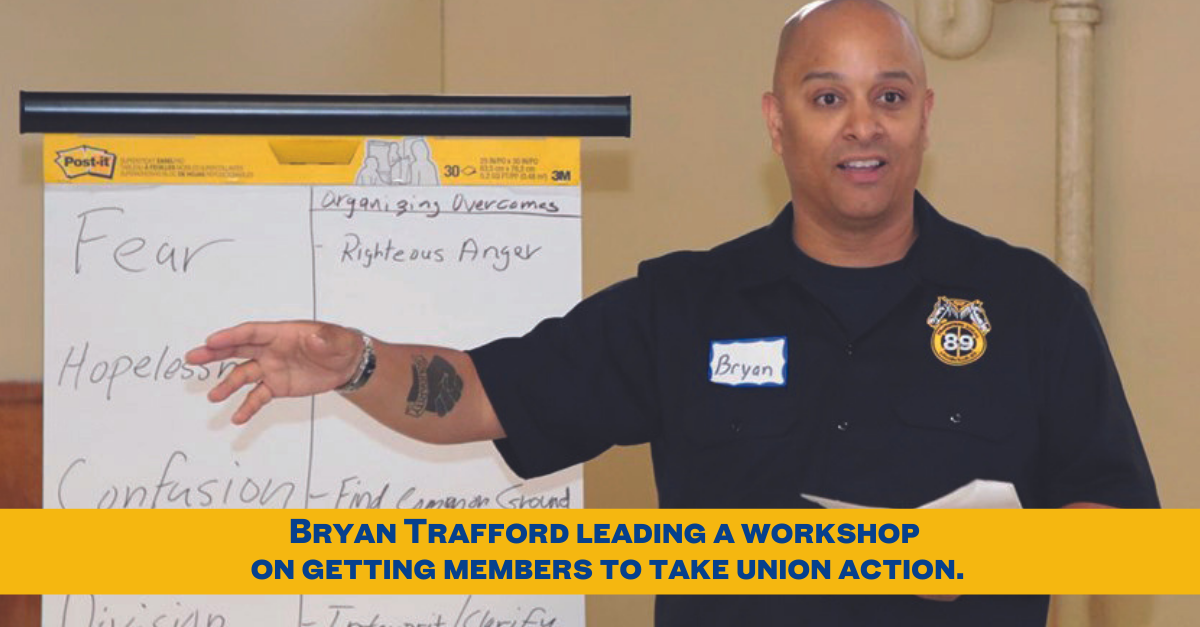 Teamsters face a lot of problems—but not all problems are issues we can organize and build campaigns on. What makes a good organizing issue?

An organizing issue is something that affects a large number of workers, and that some portion of those workers care enough about to take some kind of action. If only one person is upset about an issue, that’s probably not a good issue to organize around.

You can’t take one person’s word for it either. I made this mistake when I first started organizing. For long stretches of an organizing drive I’d think the issues that the initial contact brought up were the most important issues to the entire workplace. This is not always, or even usually, the case.

Somebody might make a good case that seniority really affects them—but you talk to four other workers at the site who talk about management harassment. You’ve got to be a bit of a detective and be patient, and listen.

How do you look for opportunities to organize?

So there’s an issue that affects a lot of members—but what are they willing to do about it? As organizers, we have to test things out. Ask questions: Would you be willing to address this with your co-workers directly to management? What would deal with the problem, or what would a victory look like?

We’ve got to map the workplace too. In every group, there’s always a leader, or a few of them. What do they think, and what are they willing to do?

Pick a small issue we can unite members around.

In the casino I worked in, management forced employees to enter the casino through a back entrance ramp where customers wouldn’t see us. In bad weather, we’d have to walk through rain, snow, and ice sometimes just to get to our work area. It felt dangerous. We’d sometimes get to our area, and be soaked; people would slip and fall on the ice. People were pissed off about not being able to walk through the casino like the customers to get to work.

I said, all right, if you’re pissed, let’s tell the boss we’re not using the employee entrance in bad weather, no matter the consequences. A group of us got together and told management.

We effectively changed policy ourselves and dared management to discipline us. The unity we showed pushed the casino to change the policy not long after, and we no longer had to use the employee entrance in bad weather.

When a worker comes up to you and starts complaining, how do you move that conversation from a gripe session into an organizing conversation?

Some people will gripe but won’t do anything. That’s OK. We don’t need to get everybody involved.

Pick a simple action, something that can be done soon. Once we get a few people to work together on something simple, they’ve got skin in the game and will want to see it through.

At the casino, our contract spelled out that we were to be provided food for purchase at the employee dining room at all times. On some busy Friday and Saturday nights however, the hot line was completely empty. A coworker who likes to complain but never takes action approached me about this and told me, the steward, “You should file a grievance.”

I saw an opportunity to get her, and others, involved. “Here’s what I want YOU to do,” I responded. I explained next time the hot line was empty, swipe your card (to pay $2 for the meal), and take pictures of the empty trays. She liked the idea and others did as well. Soon we had several people swiping and taking pictures of empty food trays on the weekend. We filed a group grievance and lots of people signed onto it. A week or two later, the issue was fixed.

What are obstacles to getting members involved, and how do you overcome them?

A lot of members have adapted to the “service union” model and just expect “the union” or their steward to handle everything.

It’s almost easier with members in a newly organized shop. We can work with them from day one to train them up and build a fighting culture. But whether with green or veteran members, it’s smart not to make the initial “ask” too big. If workers are used to doing nothing about workplace problems, doing anything is a step up!

Ask them to sign a petition, add their name to a group grievance, get on a conference call with coworkers. For some workers, adding their name to a petition is “coming out” and taking a stand against management—they’ll want to know how many others have signed, how management responded.

How do you go about building a committee, moving from that first organizing conversation to involving others in a campaign?

When we’re mapping out the workplace, we should be thinking about who the leaders are. Who do you see members going to with their problems, even if they’re not work related?

We need to involve some leaders, but a committee is more than its leaders. We don’t need everybody. Just a core group who will work together, whatever the issue may be.

We need to use every opportunity to inform coworkers and measure where they stand and what they’re willing to do. Breakrooms, dining areas, parking lots—as Teamster stewards and activists, we’re always seeking opportunities to involve more members.

Bryan Trafford is an organizer for Louisville Local 89. Over the past two years he has worked on successful organizing drives, and also on internal organizing— turning passive members into active Teamster unionists. Bryan also serves on the TDU International Steering Committee.