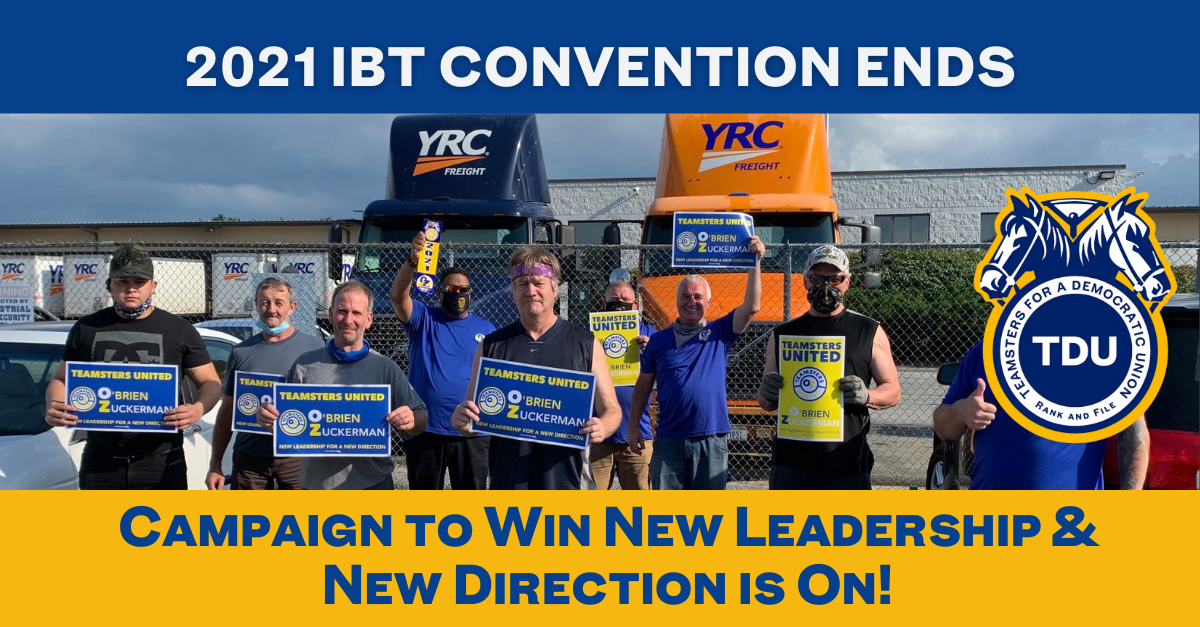 O’Brien was nominated with 841 votes to 765 for Steve Vairma. The delegates were pretty much split down the middle.

Hoffa rallied around Vairma and the power of the Teamster establishment is well known. But so are its limits. In 2016, Fred Zuckerman got just 8% (134 votes) at the Convention. But he won 49% of the vote in the election, including the majority of the vote in the U.S.

Five years later, the Teamsters United coalition is broader, stronger and poised to transform our union. It’s up to the rank-and-file to make that happen.

Aside from officially nominating the two slates, the big outcome was important reform wins in the Teamster Constitution.

We won majority rule on contracts (no more “2/3 to reject”), rank and file members on all bargaining committees, and the right to vote on supplements without being overruled.

We also won improved strike benefits: they will now be paid from Day One of a strike. TDU, Teamsters United and other Teamsters have fought for these reforms in the past. Now, they have been won.

These reform victories are proof of the growing momentum for a new direction and new leadership.

They didn’t spring from the Hoffa administration, but from the reform movement and the challenging O’Brien Zuckerman Teamsters United slate.

Fred Zuckerman drove this point home in a fiery speech to the Convention that made Hoffa grimace and walk off stage.

It was the first – and hopefully last – Convention conducted online.  The technological glitches that plagued the Convention seemed like a fitting send-off to the Hoffa-Hall era.

Fred Zuckerman and Sean O’Brien delivered this recorded video when they accepted their nominations, as the convention closed.

The nominations vote was an anti-climax, compared to past Conventions where reform candidates worked hard to get the vote of 5% of delegates needed for nomination.

This time, all the O’Brien Zuckerman Teamsters United candidates were easily nominated. O’Brien got 52% of the delegate vote, with Vairma getting 48%.

This is very different from 2016, where Fred Zuckerman got just 8% of the delegate vote, and then went on to win 49% of the membership vote.  The Teamsters United candidates in the Southern and Central regions got from 6% to 10% of the delegate votes in their region, then went on to coast to victory in the rank and file vote, taking 59% in the Central and 57% in the Southern.

The delegate vote bears little resemblance to the membership vote.  Change is coming from the bottom up, not the top down. The key to victory this November is to organize in every local to turn out votes for a new direction.

You can see the convention delegate votes on all nominations here.