Why a No Vote Does Not Mean a UPS Strike

The International Union is trying to scare UPSers into accepting contract givebacks by sending out a new postcard that threatens members with the possibility a strike at UPS. A No Vote does not mean a strike at UPS. Here’s why. 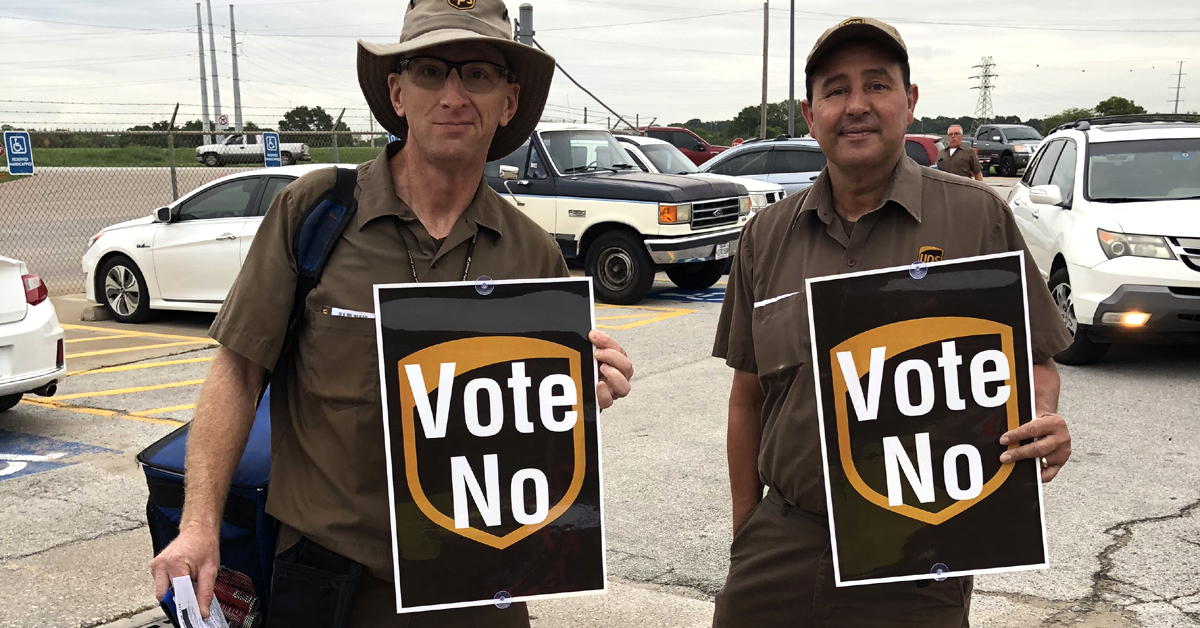 The contract vote is underway and UPSers are Voting No to stop two-tier 22.4 drivers, take on harassment, subcontracting, and excessive overtime, and win $15 starting pay and catch-up raises for part-timers.

Hoffa and Denis Taylor are blitzing members with a Vote Yes propaganda campaign, including a new postcard that warns members that, if you Vote No, “You run the risk of a work stoppage without further review by the members.

Here are five reasons why members should ignore this scare tactic and Vote No.

1. Voting No Will Send the Negotiators Back to the Table

A No Vote does not mean a strike. After members Vote No, the International Union and the company will return to the bargaining table. That is exactly what happened when members have Voted No in previous national contracts at UPS and in the freight and carhaul industries.

2. Hoffa Has Used This Scare Tactic Before

The Hoffa administration used this bluff before. Hoffa threatened carhaul Teamsters that a contract rejection would mean a national strike that could put companies out of business.

Members called their bluff and Voted No, not once but twice. There was no strike. The International Union and management returned to the table and members won a better contract.

3. UPS Does Not Want a Strike

UPS wants no part of a strike. The company was soundly defeated in the last strike in 1997. Today, UPS faces even more competition and is even more afraid of losing customers in the event of a strike.

When the contract is rejected, UPS will come back to the table to try to work out an agreement.

4. Hoffa Does Not Want a Strike

Hoffa does not want a strike either. In two decades as General President, Hoffa has called exactly two strikes, the last one was 14 years ago.

Hoffa doesn’t call strikes. But he does threaten members with strikes every time he is worried about a bad contract being negotiated.

He did it earlier this year at ABF. Members at ABF in New England Voted No anyway. They won a better offer that protected their pension and healthcare. He did it two years ago in carhaul, and members won higher wage increases and stronger job security by Voting No.

Members at YRC Voted No nationally. There was renegotiation, and no strike.  Five years ago, UPS Teamsters voted No on 18 supplements; the union had the right to strike in those areas. There was no strike.

5. The Bigger the No Vote, the More We Can Win

We can defeat givebacks and win a better contract; the bigger the No Vote, the more we can win. That means we need to do more than vote.

We need to talk with other UPSers and encourage them to Vote No too. It's crunch time. Will you help?

How the Contract Vote Works

What to Do if You Don’t Get Your Ballot Packet