Teamsters at ABF stand ready to fight for major improvements in the 2018 freight contract. 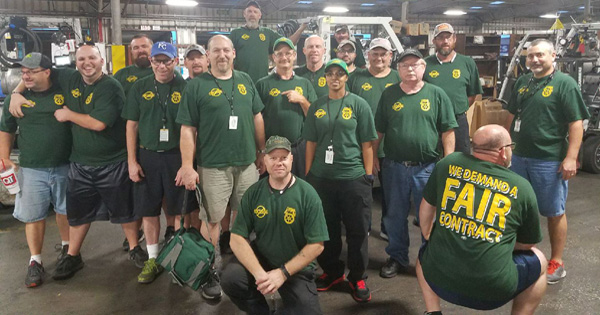 “We won’t accept another sh*#y contract,” commented Mike Heath, a road driver out of Salt Lake City. “ABF is making money hand over fist and still crying poverty. Well, we’re not buying it. Even guys who voted YES last time now see through their lies.”

Negotiations opened in January and more sessions are scheduled for February with the contract expiring March 31. Members have said that the starting point for negotiations has to be restoring all that’s been cut over the life of the 2013 contract. Teamsters want a significant improvement on wage rates, a return of the lost vacation week (and bargain additional time off), maintain and improve pension and health benefits, and a stop to the abuses of purchased transportation that is devastating road boards. Get that done, and we’re on the way to a good contract.

But winning a strong contract won’t happen if Teamster rely solely on negotiations. ABF and the IBT need to see members are ready to vote NO on any substandard agreement. But as we learned in 2013, a NO vote only goes so far. We need to be organizing contract campaign actions that show visible support for winning a decent contract.

Teamsters in Kansas City, Little Rock and other terminals have started wearing t-shirts showing their solidarity. Others need to join these brothers and sisters and do the same.

“We started wearing the No Concessions t-shirts,” reports William Dillinger, a road driver at the Memphis terminal. “Management tried to challenge us on our rights to wear them but we pushed back and won. They know we’re serious about getting a good contract.”

Teamster can wear t-shirts to and from punching in/out, on the dock, and over-the road. City drivers—or Teamsters who deal directly with customers—are prohibited from wearing t-shirts outside the terminal on work time. See the ad for ordering t-shirts.

Ongoing organizing is key. An initial conference call, sponsored by Teamsters United and TDU, explored putting together a coordinated plan to win.

“We need a national contract campaign network that’s built off the conference calls and other networks we have out there,” said Kevin Koubeck, an Akron road driver. “We need ABF Teamsters to get involved and pay attention to the issues. When it comes time to vote, be prepared to make your decision. We ALL need to vote.”

Contact TDU or Teamsters United to get involved and help win the contract we deserve.

Order t-shirts, sign up for contract updates and get involved at www.TeamstersUnited.org/ABF