Unions are Punching Back

The labor movement is on the move against givebacks and inequality. Teamster members deserve leadership that’s in the fight, not on the sidelines. 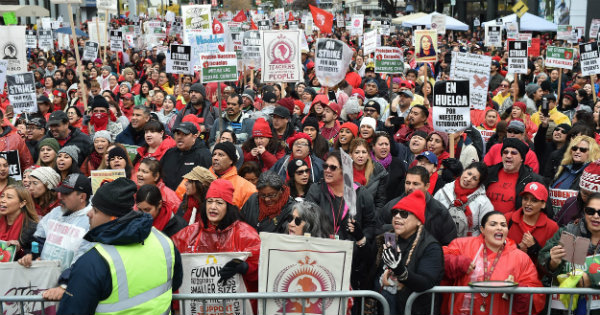 Inequality is out of control and the labor movement is fighting back.

Real wages, adjusted for inflation, have been flat since the ‘70s. But the income of the top 1% has tripled. The top one-tenth of 1 percent now owns almost as much wealth as the bottom 90 percent.

No wonder we are seeing a rise in organizing drives, contract fights, and strikes. There were more workers on strike in 2018 than in any year since 1986—and the strike wave continues this year.

Many Teamster locals have used strikes and credible strike threats to reverse givebacks, close two-tier agreements, and protect their benefits.

But our International Union, under Hoffa, uses the strike threat against members, not employers. When threats don’t work, Hoffa has imposed contracts rejected by the members. Other unions are fighting two-tier contracts; the Hoffa administration imposed a
new two-tier for drivers at UPS, a company that makes $6 billion a year.

The Strike and Defense Fund has $206 million. That could be a powerful weapon to back members in winning better contracts—but employers know that Hoffa is there to go along and get along. A strike fund means nothing without a credible strike threat.

Contract victories inspire workers to join our union. Givebacks do the opposite. The labor movement is on the move against givebacks and runaway inequality. Teamster members deserve International union leadership that’s in the fight, not on the sidelines.