Concessions for You—Not for Them

Should Hoffa administration officials who negotiate contract givebacks be rewarded with fat salaries? 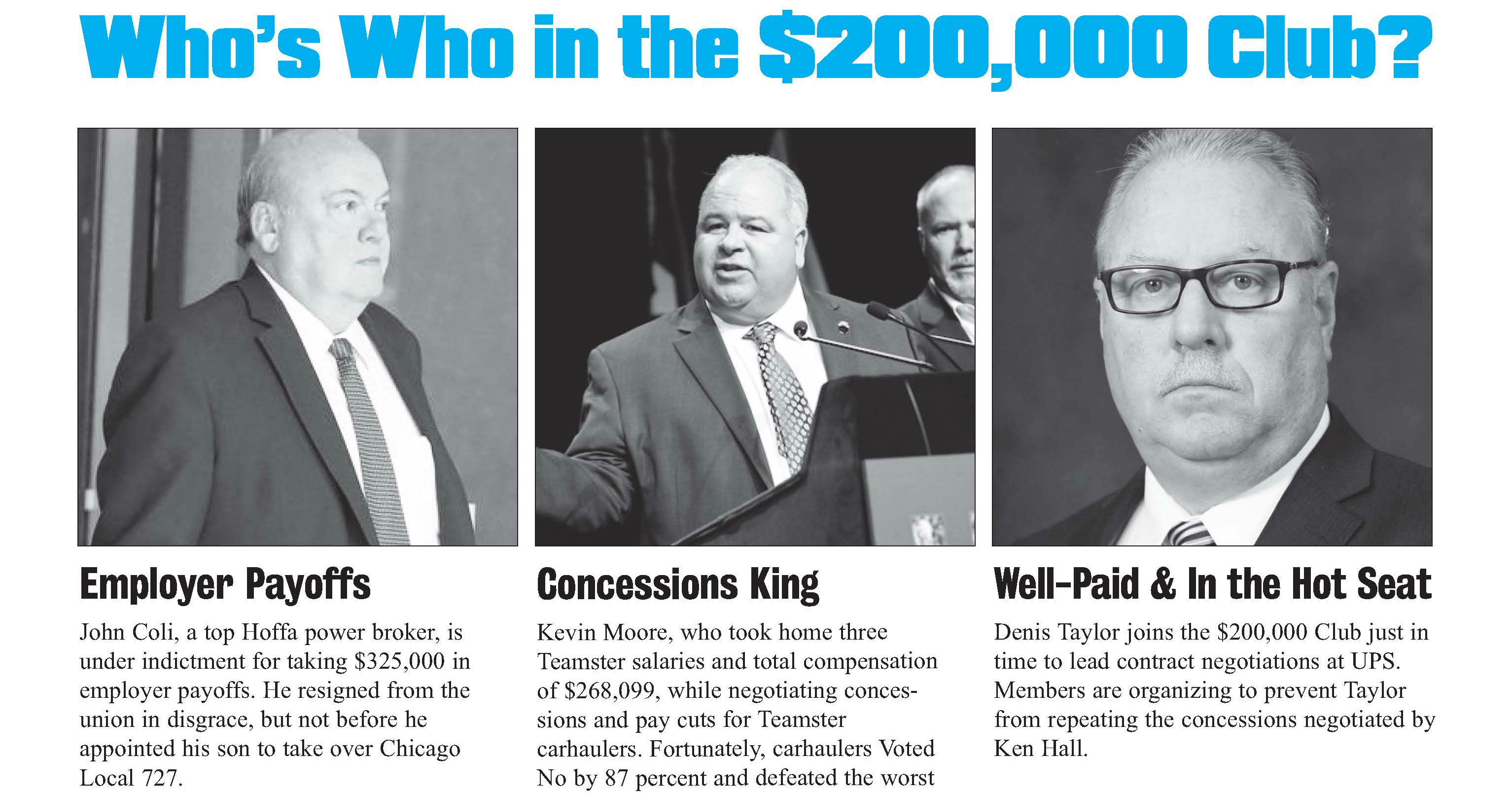 Each year, TDU prints the $200,000 Club listing of our union’s highest paid officers. We report the facts so you can decide who’s earning the money, who’s not, and what should be done about it.

This year’s $200,000 Club covers 2016 and includes Hoffa administration officials who negotiated givebacks in some of our union’s biggest contracts.

Others in the Club were caught taking employer payoffs or embezzling union funds, including the disgraced Rome Aloise, John Coli, and Willie Smith.

The $200,000 Club has 48 members this year—the most ever. Three of them are on the way out of the union, after being caught in crimes against the members.

Four $200,000 Club members were voted out of IBT office in the election of November 2016, thanks to the Fred Zuckerman Teamsters United slate. Three of those four, John Coli, Ken Wood, and Brian Buhle, have retired from the union, taking giant pension payments on the way out. Tyson Johnson also retired after being defeated as Southern VP.

Six officials inflated their salaries over the maximum allowed by the IBT Constitution, which states that no official on the International Union payroll can exceed the General President’s salary.

Some of the officials in the report are hardworking, qualified individuals. This listing is not a condemnation. It is a factual, nonpartisan report to the members, which has been published annually for more than 35 years.

Putting this salary information in the hands of Teamsters member has greatly reduced excess salaries. Teamster General President Jackie Presser paid himself over $500,000 in 1983, which is $1.2 million in today’s salaries.

Exposing greed has helped to curb it and freed up more union funds for organizing and fighting for good contracts. But more needs to be done to reallocate union resources.

Most of the people on this list receive multiple salaries from the International Union, creating a patronage system used to maintain Hoffa and his associates in power.

If the top salary for Teamster officials was capped at $200,000, except for the General President, it would free up nearly $3 million in dues money to put to work for the members.

Union officers should be compensated well for their work, but greed has no place in our union.

One solution to dues waste is for active, informed members to come together and demand change. That’s what TDU is all about.

A second solution is to change our union’s leadership and rid the Teamsters of corruption.

TDU members work to make this happen. If you agree that knowledge is power, and that we need new leadership, become a TDU member and stand with the thousands of Teamsters who have joined TDU to organize for change.

PUT OUR DUES TO WORK FOR THE MEMBERS

“Our dues money should be to be put to work to defeat concessions, protect our pensions, and win better contracts—instead of being wasted on outrageous salaries for Hoffa and other weak leaders in the $200,000 Club.”

WHERE DO WE GET THIS INFO ON THE SALARIES OF TEAMSTER OFFICIALS?

The Teamster Rank and File Education and Legal Defense Foundation (TRF) analyzed hundreds of LM-2 financial reports and IRS 990 tax forms for 2016, filed by locals, joint councils, conferences, and the IBT. Click here to find out how to access the LM-2 of your local union.

The information is factual and nonpartisan, and includes every officer we have salary data for. Locals 2010 and 1932 have refused to comply with federal law which requires them to provide copies of their 2016 Form 990 tax returns. Data for those locals are from 2015.